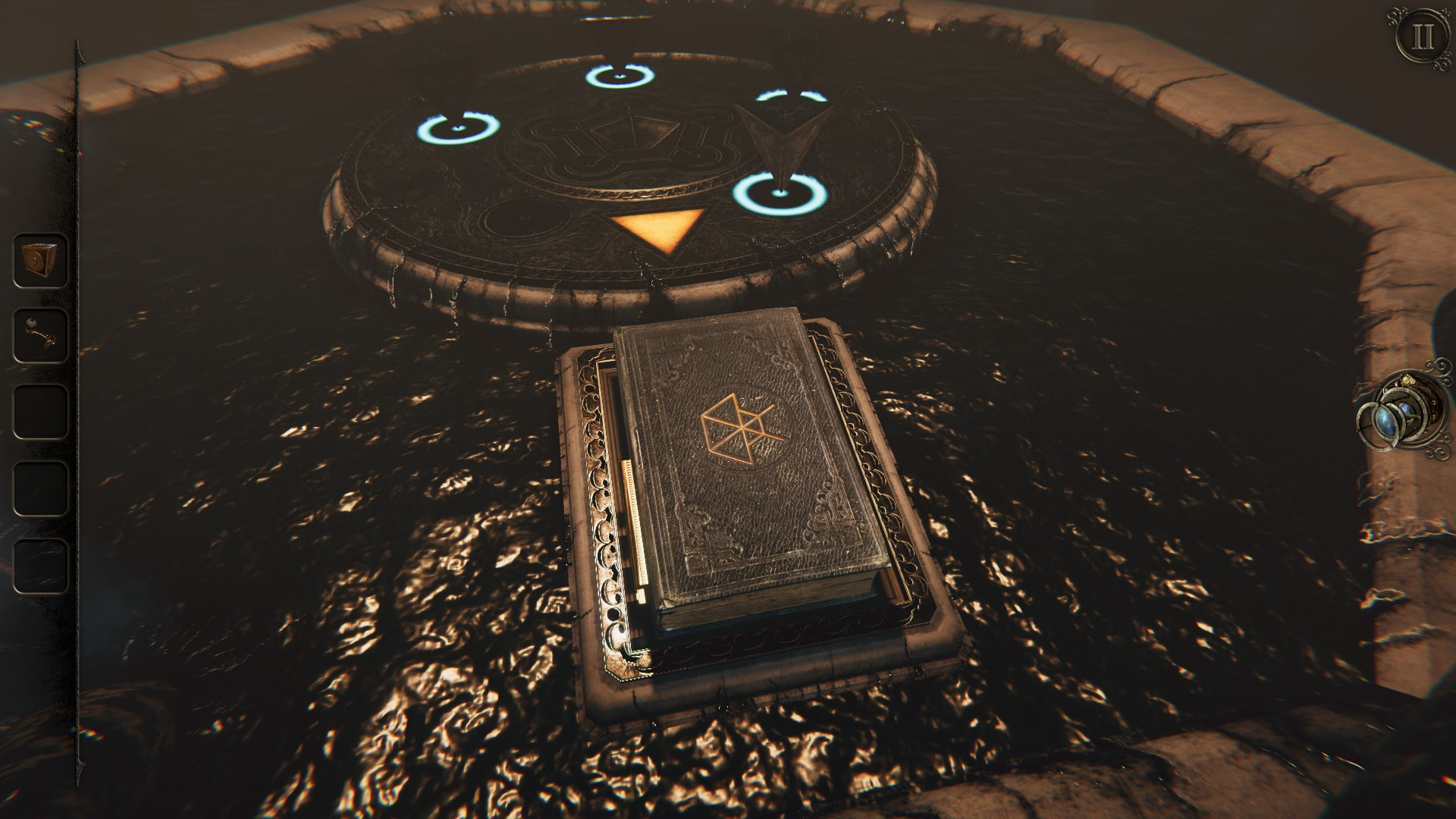 The first The Room game I played was the VR title named The Room: Dark Matter. I enjoyed the game very much (review here) and that is why I decided to buy the previous games that existed at the time. After playing The Room One I was very disappointed with it (review here) and was not sure if I'd play the following games. I suffered through The Room Two - too ambitious project Fireproof Games didn't seem to know what to do with - and then just gave up. 11 months later I decided to play the third game in the series. To my surprise the game was different than the previous two games.

The Room Three is a mix of point and click adventure and a puzzle game developed and published by Fireproof Games for PC in 2018, three years after its original iOS/Android release. The game is about still unnamed protagonist from the previous games who gets kidnapped and imprisoned by The Craftsman on an island everyone avoids. The protagonist's task is to prove himself to the Craftsman and that is how the adventure begins. What you need to do is power up rooms or buildings, open a hidden door and solve a series of puzzles to get a pyramid. After collecting all the pyramids you are allowed to go to the final stage of the game and reach one of the several endings. While on your adventure or rather escape you learn more about the mystery about the Null - mysterious alien creatures/energy - through notes left by the Craftsman and his prisoner.

The Room Three is different compared to the previous two games mainly because the game takes place in one building complex where you have to walk around and backtrack to find and solve puzzles. For me it breathed more life into the game and gave me a sense of immersion that I didn't have in the previous games. The environments are beautiful and walking around would be simply wonderful if you could do that, instead there is one place you will simply appear after a rather long animation of getting there. The game is still linear and won't allow you to roam freely most of the time while you are 'locked in' a chapter. You are actually locked in a certain part and can't leave until you finish the chapter. After finishing the game for the first time you will be able to 'Change your fate'. You will be back in the old manor and you can try to walk around and solve certain puzzles to reach 3 more different endings. This time the objects you are looking for can be anywhere and can be used on something being totally elsewhere. Once you get all the needed objects you can go to the final stage of the game, solve the same puzzles over and over and get the different endings. In a way, we can be happy not to replay the whole game, but 'solving' the puzzles again certainly feels bad. As for the puzzles, similarly to previous games, I wouldn't really call them puzzles. The game is more of a 'find an object, insert it into another object, move this and that, get a new object'. This time the order of puzzles is actually logical even though you still don't need to use your brain to solve them. As in the previous games you'll be clicking around, finding things that can be moved or pressed. If you played the previous games you won't need to click around that much since you might already look at a drawer from all angles in anticipation of a switch or a button at an unlikely place. When you get a new object you'll try to think where it could fit. I'd say the complexity went down in this game but I don't think it was a bad decision. The puzzles and menial tasks you have to do are not confusing which makes the experience good. Thanks to the eyepiece that shows hidden things you can also enter small places - see Alice in Wonderland - and thus operate some things from the inside. I liked this very much even though it wasn't as cool as in VR.

There are still hints in the game. If you get stuck you can click on a lit up question mark and get a hint. There might be more hints for one puzzle and there is a timer when the next one becomes available. There are no hints for puzzles needed to be solved for the alternate endings.

The graphics is beautiful. The textures are beautiful and seem to be of high resolution. Lighting is great. The only thing that's weird are the Null tentacles which seem to be rather low poly compared to other models and moving at half framerate. I haven't played the game on mobile but the PC version truly feels like a game meant for a computer unlike the previous games that tried to run in a mobile phone resolution and whatnot.

I can't comment on sound or music because I turned it off (due to certain sound effects irritating me in the previous games so much).

As for the controls it felt similarly awkward as in the previous games. If you can avoid playing this game with a mouse I recommend doing that - either a touch screen or tablet. On the other hand due to less creative and complex puzzles you don't need to be moving objects in a really strange way so you should not struggle as much as in the previous game. 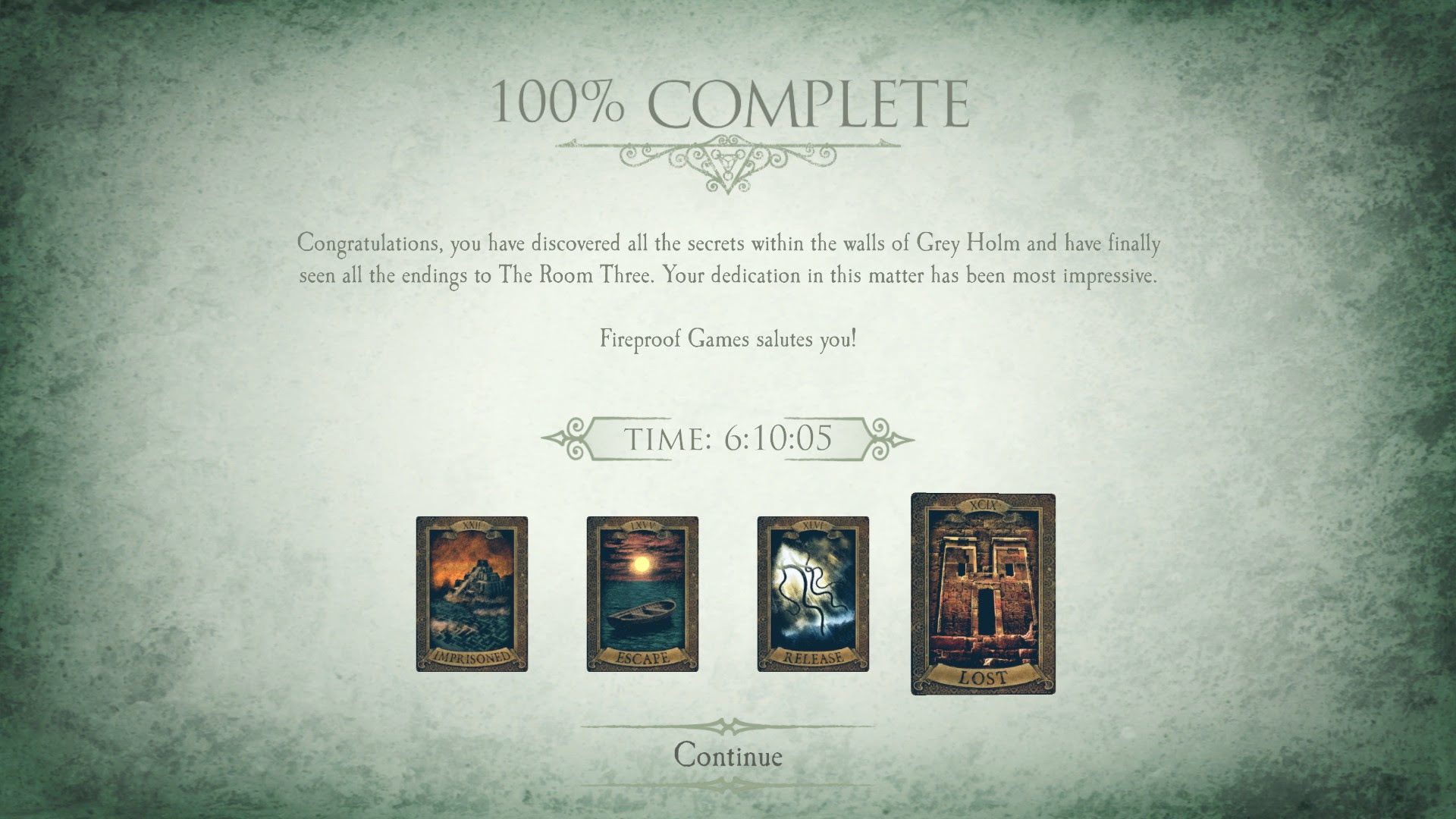 Verdict:
The Room Three feels more like a PC adventure game rather than a mobile puzzle game. It is a point and click game and that's about it. The previous games focused solely on the puzzles, the first one on single objects, second one on various objects within a room. The Room Three takes it a step further which may not work that well for a mobile device but works on PC. On the other hand this game is very limited in terms of exploration and this way feels rather lacking. While many animations felt more smooth and faster than in previous games, the one most important animation - movement from one place to another - takes a very long time.
The graphics are way better and make the game a very enjoyable atmospheric experience (with several horror elements).
The controls are still as clunky as ever but the puzzles themselves require less object manipulation which results in less frustration. On the other hand the game is rather buggy and often there are certain layers of graphics that do not align and that make operating the game or solving puzzles more frustrating.
I finished the game in 6 hours including the alternate endings which makes it longer than its predecessors and provides more on the story as well.
I wouldn't recommend this game to anyone, but if mindlessly clicking is your thing you can give this game a try.

Thank you for reading
Ren

Email ThisBlogThis!Share to TwitterShare to FacebookShare to Pinterest
Labels: Gaming