Beat Saber Modding Group runs a Halloween contest where we can submit either maps or models. I decided to work on an avatar, a saber and a platform.

I didn't get a funny idea for neither models but I got an idea for possibly nice looking outfit and I had an idea for a sword.

The avatar is the first thing I started working on. It was decided that I would use an avatar I created for my flatmate since I promised I'd also make a succubus version later on. The idea of creating a functional wings scared me at the time. This time around though I got a good opportunity to try to keep my promise.

I started with creating the outfit. I wanted to create something like a lolita dress in black, red and white. The reason being that I needed a relatively short skirt so the avatar could freely move and the legs could be seen. I've tried different kinds of dresses previously and this is something that works for VR. After I finished my outfit I realized that what I painted wasn't probably Beat Saber friendly since it was too detailed and I wasn't really sure how gradients would look in the game either. 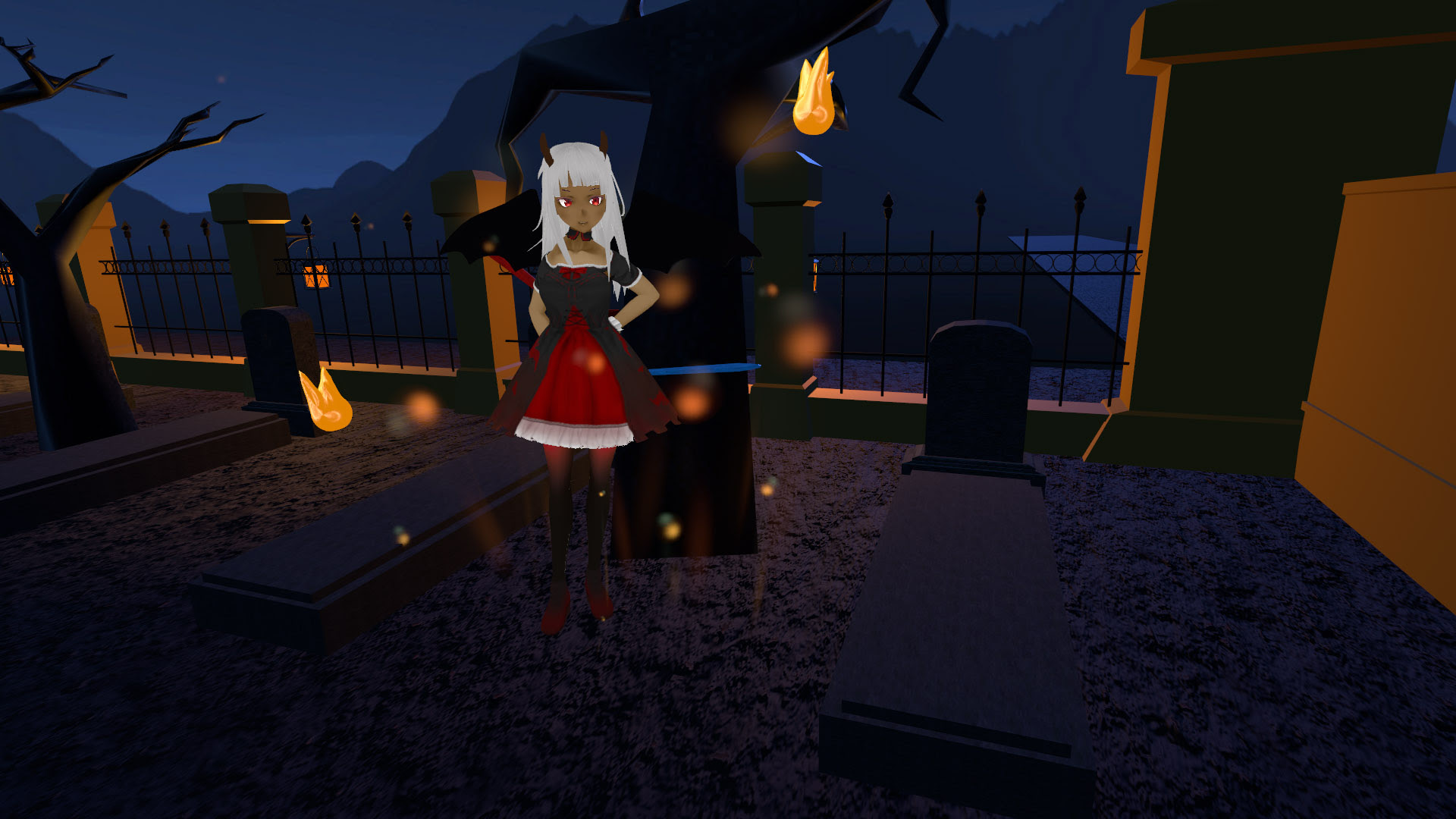 Nonetheless I decided to keep it that way and decided to figure out what to do with the wings. I spent quite a while trying to figure out how to create a wing. It should be easy, right? You'd just draw the outline with the finger parts and continue from that. I used to do that ages ago but in Blender I had no idea I'd go about that. It didn't come to my mind to check some tutorials so I created some wings and then I tried to rig them. Is spent ages trying to do that and in the end rigged them in a manner that wouldn't allow the movement I was looking for. At that point I realized that checking a tutorial would have been a great idea s I checked some tutorials. Anyway I had bones in the wings that were attached to Aurora's body and they were weight painted. Now she needed some horns and a tail. Tail was another problem, I just don't know how to create a nice looking and nicely moving tail...

When all the work in Blender was done I imported the avatar to Unity and started wondering what to do with it there. I realized that I wouldn't be able to use a toon shader I usually use (since I had VirtualMotionCapture in mind instead of customavatars which is what the contest uses) and would have to come up with some glowy lit shader that Beat Saber can understand. I found out that I did not need to bother with texturing the wings or tail since it would get lost in Beat Saber.

After playing with different shaders I started playing around dynamic bones and when I was more or less satisfied I thought I was done with the avatar.

I still had the urge to add something more to it. It should be a Halloween avatar with something special. That's when the idea of onibi came to mind and I tried playing with fire. I produced relatively fiery looking fire in Unity but when I put that avatar in Beat Saber it hardly resembled the particle systems I created. So I decided to get rid of the fire and just keep a particle system that would look cool in my eyes. Honestly I didn't think that setting that up would be difficult since I knew what I wanted and how I wanted it to look. Beat Saber though had a different idea of how to show my creations so it took many attempts to get it look the way it looks now. 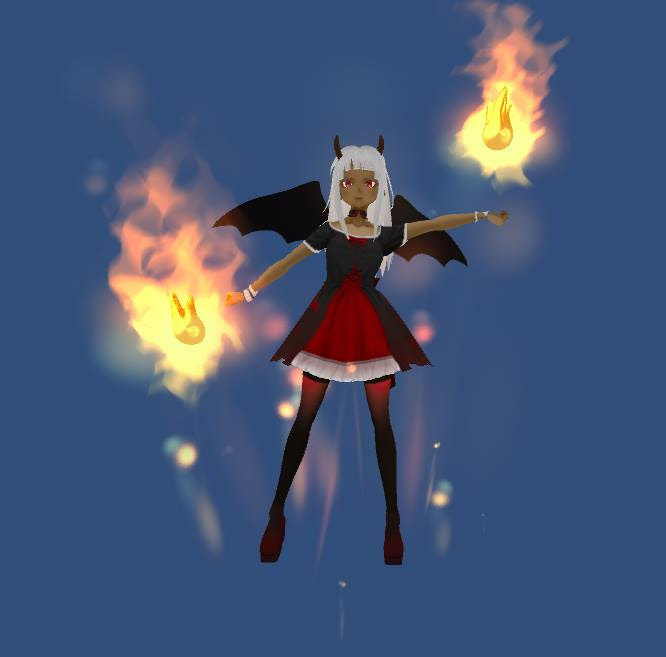 As for the saber that was another story. Since I had a really 'great time' working with wings (they seriously almost drove me crazy) I decided that my sword would have hilt made of wings too and while at it why not create something that would resemble a bat? The sword is simple since it's for Beat Saber which doesn't really show that much detail. It still took me a while to figure out how to make it at least a bit pleasing to my eyes. After I had the model done in Blender it was time to see if I could make it look at least half as cool as it looked rendered in Blender. In the end I was surprised how well it came out in Beat Saber. 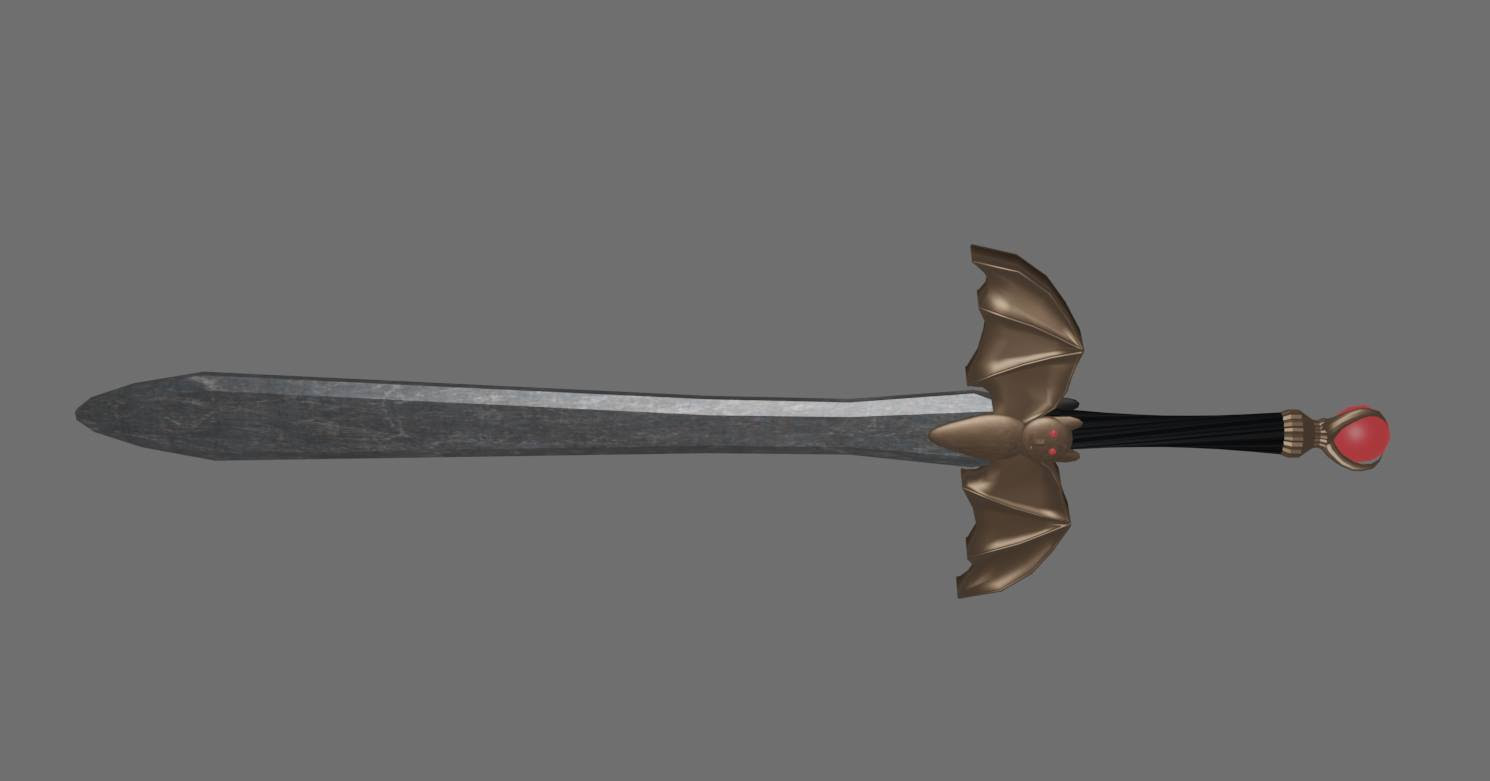 Let me tell you, the first five iterations looked awful and I wasn't sure if I'd make it look at least ok. 14 more versions came to existence until I could finally consider my saber complete. 18 version was needed in the end because I had to fix my trail. The custom saber uses custom color so the blades will keep their blue and red colors but the trail color will change accordingly. I spent a long time thinking about what kind of trail the sword should be leaving behind and in the end I decided to create a custom trail out of bats. It turned out to look way better than I expected so I decided to keep it. This is a screenshot of the final - 18th version. 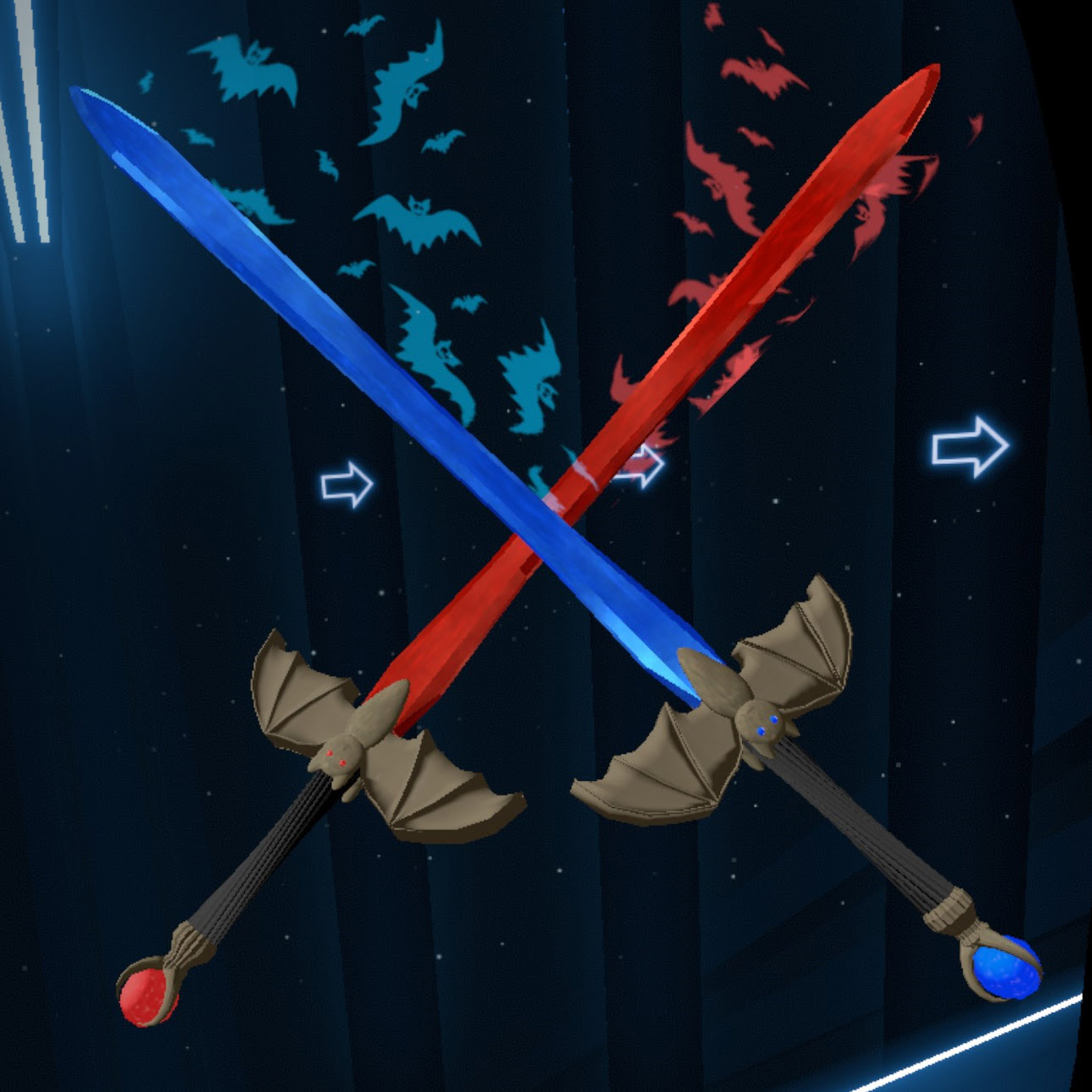 I was told to be in a quarantine for two weeks and I was wondering what to do with all that time. I opened Blender and started creating some stuff and while at it I thought that I could try something Halloween themed. That is how I started creating some walls, fence and trees and then started creating a nice graveyard in Blender. Then I stopped, facepalmed myself and exported each object so I could use it in Unity. There I put the objects in place to create something that could work as a platform in Beat Saber. I didn't want to test it since I knew that usually my first tests were bad. So instead I continued on until I was happy with what I saw in Unity.

In Blender I just created a material but didn't really touch it since from the start I knew I'd want to play with this in Unity and from my last project I knew that how I set up my nodes in Blender wouldn't correspond to what I'd be doing in Unity. So I pondered about how to create a pumpkin which would be partly lit, would glow from inside etc. with the use of Beat Saber shaders. Because Emission in Beat Saber is something I can totally forget about. Anyway I recreated what I wanted more or less by putting the emission alpha texture to diffuse, the albedo texture that would normally be in diffuse to specular and then changed the values so both would 'glow' the way I want.

When I was happy with what I created it was time to see if it actually worked in Beat Saber. To my surprise it DID! I had to move some stuff around because of the text in-game. All I needed were three versions (I had to change the 'lighting' on some objects). 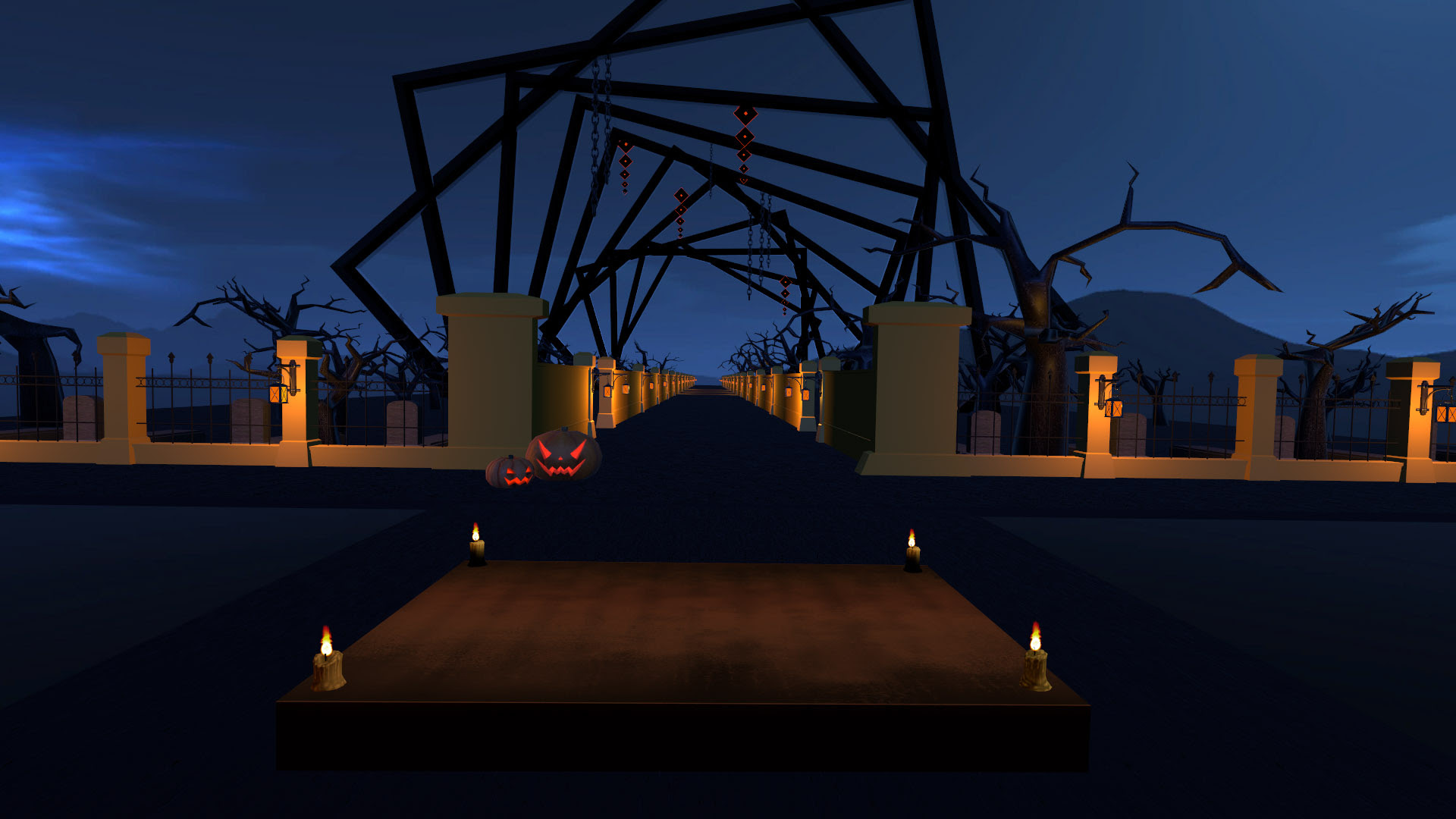 I don't think I could win anything in this contest but I participated and that counts. I certainly learned more about Unity and Blender and I even familirized with Blender more because before I was just using the mouse for everything since I had no idea about keyboard shortcuts or where I could find this or that. This changed after I finished Aurora avatar. I spent so much time on it that I was forced to learn some keyboard shortcuts and I'm very grateful for that.

I'm glad I could submit something to this contest and I'm looking forward to seeing all the entries. I'm curious about what people submitted. Next year, if my ability to model stuff, work with Unity and work with lights will improve I might create a Halloween world for the VRChat contest.