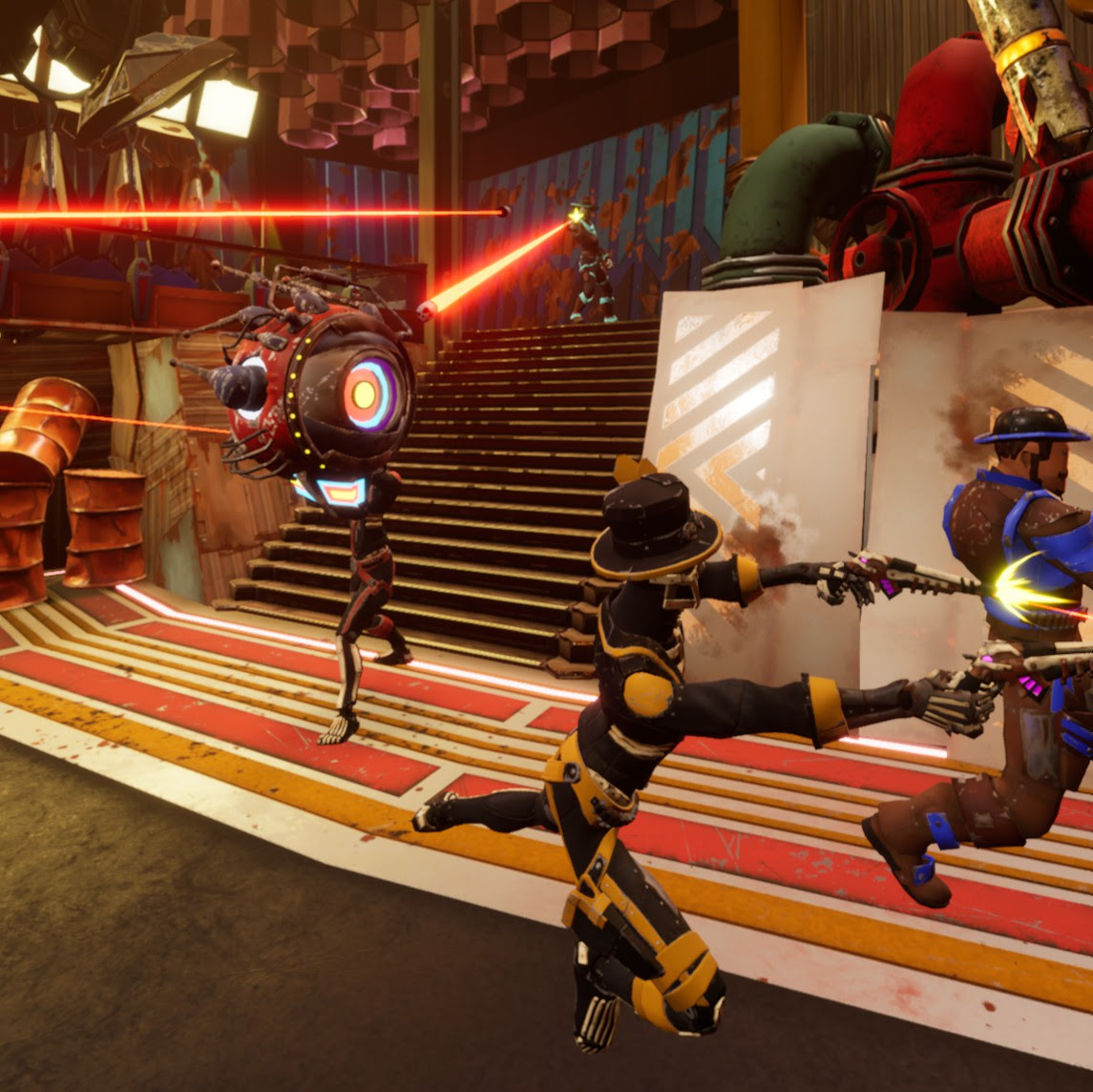 If you've been to arcades like Dave & Busters you might have noticed a game named RevolVR already. For those that play games at home this title might be new and the number 3 in the title might be a bit confusing.

RevolVR 3 is a casual single and multiplayer shooter that takes place in a robotic Wild West. A player will appear in a steampunk/industrial wild west saloon where they can socialize with other players, play Russian roulette, hunt a drone, or try to shoot bottles in the shortest time possible. When ready the may proceed to an arena where 3 rounds of deathmatches begin. Each player has two revolvers with which they have to shoot as many other players as possible. The players have certain amount of life so one shot won't do the job. When a player dies they respawn somewhere else in the arena and can continue shooting others. The players can move on a limited area where they can hide behind cover. After a set amount of time a player will appear in the void where they can see stats for the round. Following rounds will take the player into other arenas where once again you have to try shooting as many players as possible and avoid death.

The deathmatch can be played either with strangers online, with bots or with your friends. There's not many players around currenlty. 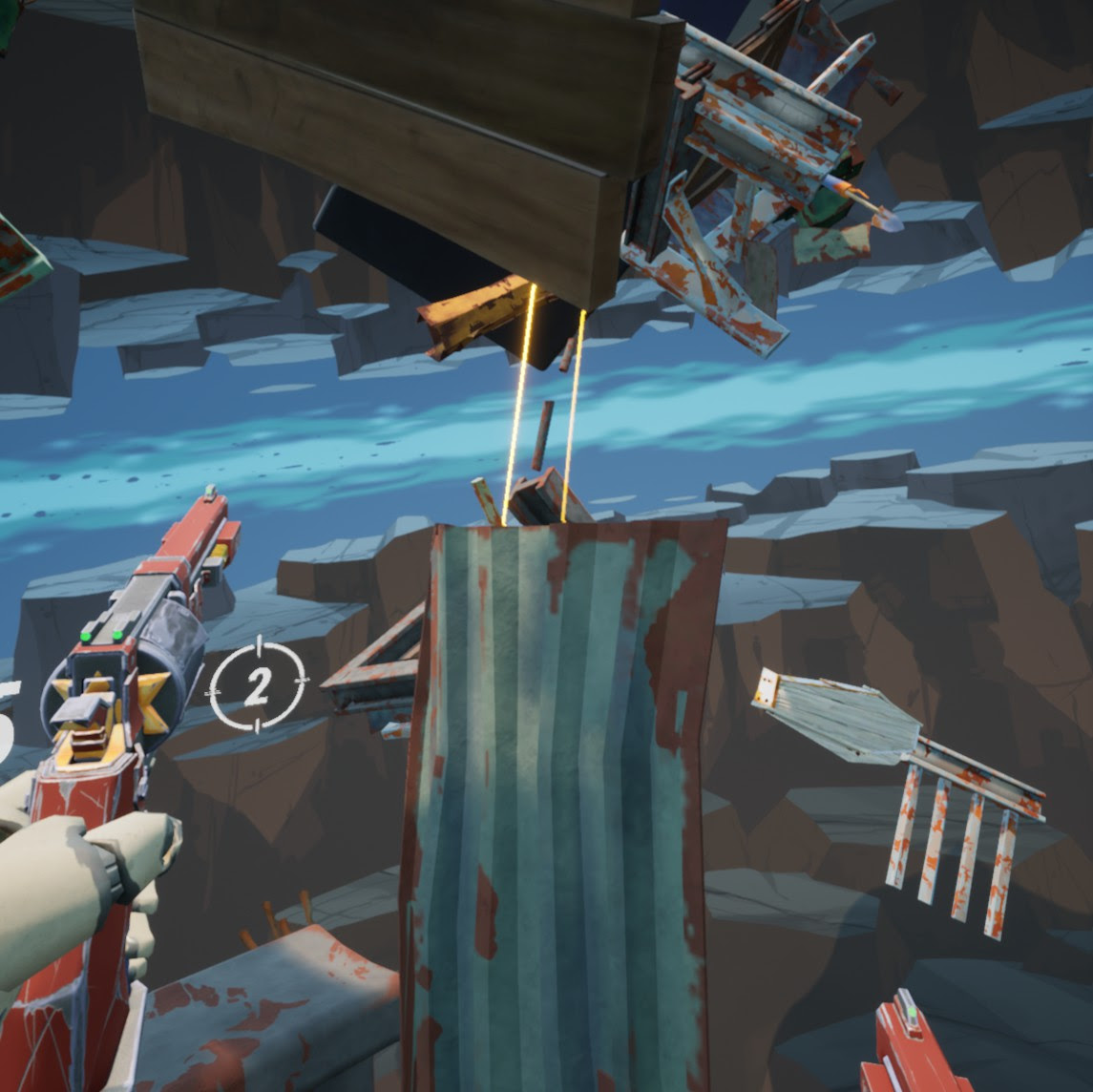 The game itself has nice simple but very polished graphics and the saloon is a really great place. The music there is good too and fits the environment. When I went through the tutorial I was amazed how well that was done. The lobby where you can meet other players is nice but the amount of interaction is limited. I also learned that to some players I was simply a ghost even though I could see them and their scores. The mini games didn't appeal to me even though shooting at the bottles was something I tried since I wanted to see how the shooting works. It seemed off but but I didn't find out what caused it. I somewhat compensated that the guns didn't shoot where I pointed and then it was fine when it came to shooting the bottles. Once you figure out where to place your hand you will be able to shoot the bottles fast - there is no recoil or anything that would make your hand/pistol move. You can also use both of your hands if you wish so which will allow you to be faster. Unfortunately that's where all the fun ends. This would have been a great place to be if you could use voice chat, play spin the bottle, a card game with the emoji cards for example etc. In VRChat this place could become very lively, in this game though it is rather dead. 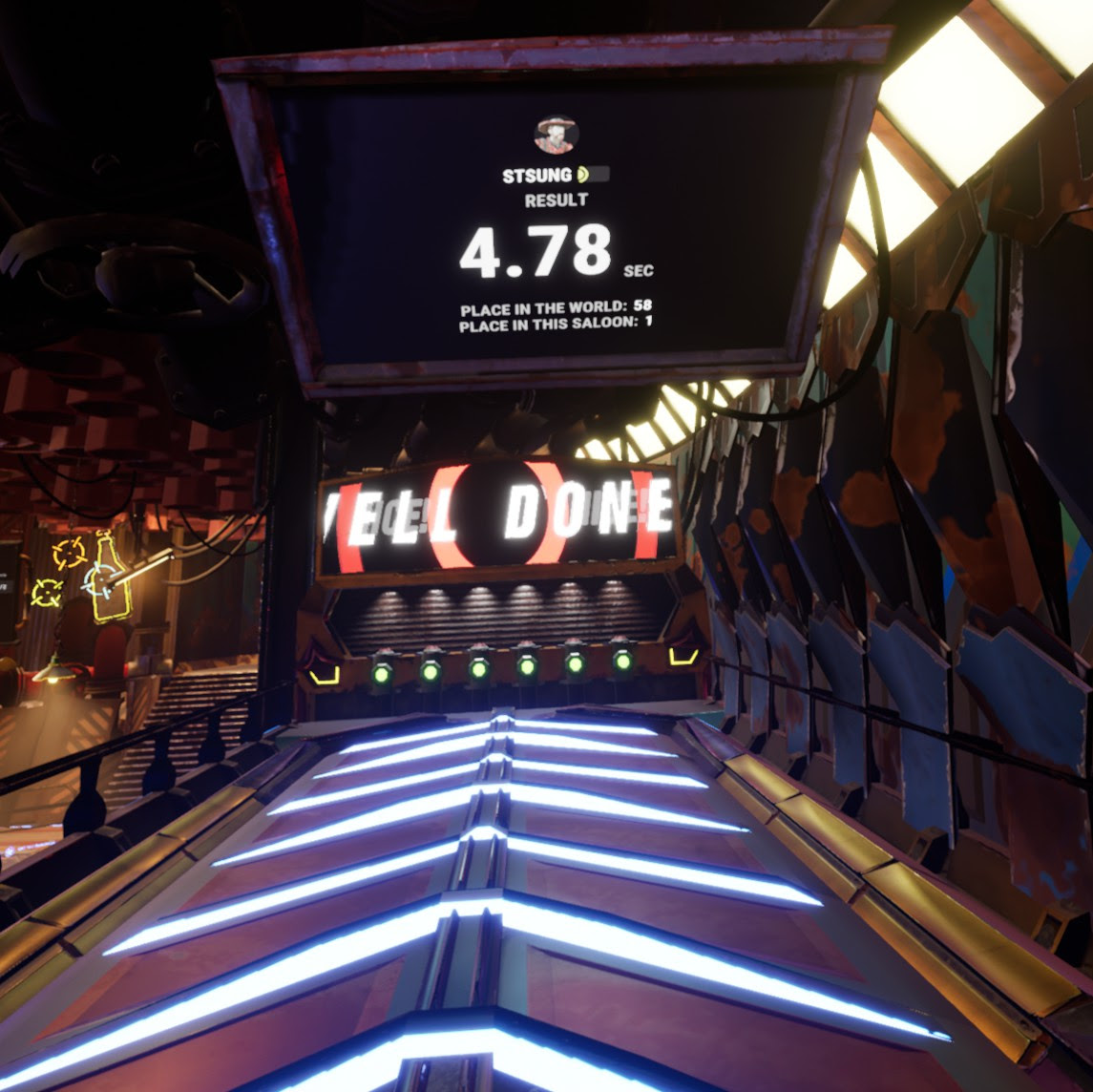 As for the main game, there are currently three arenas - a graveyard, an oil platform and '3d arena'. I can't complain about how the arenas look even though the graveyard seemed a bit bland to me (way too cartoonish even for the overall slight cartoonish style). The graveyard is a good starting point because the arena is rather flat. The platform is layered so some players will be slightly above or below your level. The third arena defies the laws of physics (like you can't really say where up is) and is quite special because you can shoot in all directions (rather the players can be in all directions). Looking around this place was fun on its own (until you got killed).

What I didn't appreciate much was that the spots where you can spawn are not really equal in terms of cover or even space. So depending on where you spawn you can immediately get shot in the back. You won't be able to shoot some players because they will be either too far, offscreen, or completely hidden if they choose to stay hidden. This means that sometimes you'll just want to immediately die to respawn somewhere else.

Another thing I didn't particularly enjoy was the performance. I played on Ryzen 3800x, Titan X and I was told by the devs that this is close to minimal specs for the game even though it is supposedly near the 'recommended' ones on Steam. The game did not run well for me unlike for example Half-Life: Alyx with the best graphics settings set. Since the performance was poor I cannot tell you if the shooting would behave the same way on a system where it would run smoothly (I tried changing graphics settings in SteamVR to something lower but it didn't seem to help). I had problems with the gun shooting from a different position than the one I saw. Also aiming wasn't really centered compared to other games I'm used to play games where I shoot (without aiming) and hit where I want. I learned later that aiming is not actually necessary because the game is more about just unloading your magazine into your enemy as fast as you can shoot (slowly). You can reload before you ran out of ammo but even that kind of a reloading takes a lot of time, so you can just shoot and let the game reload for you. 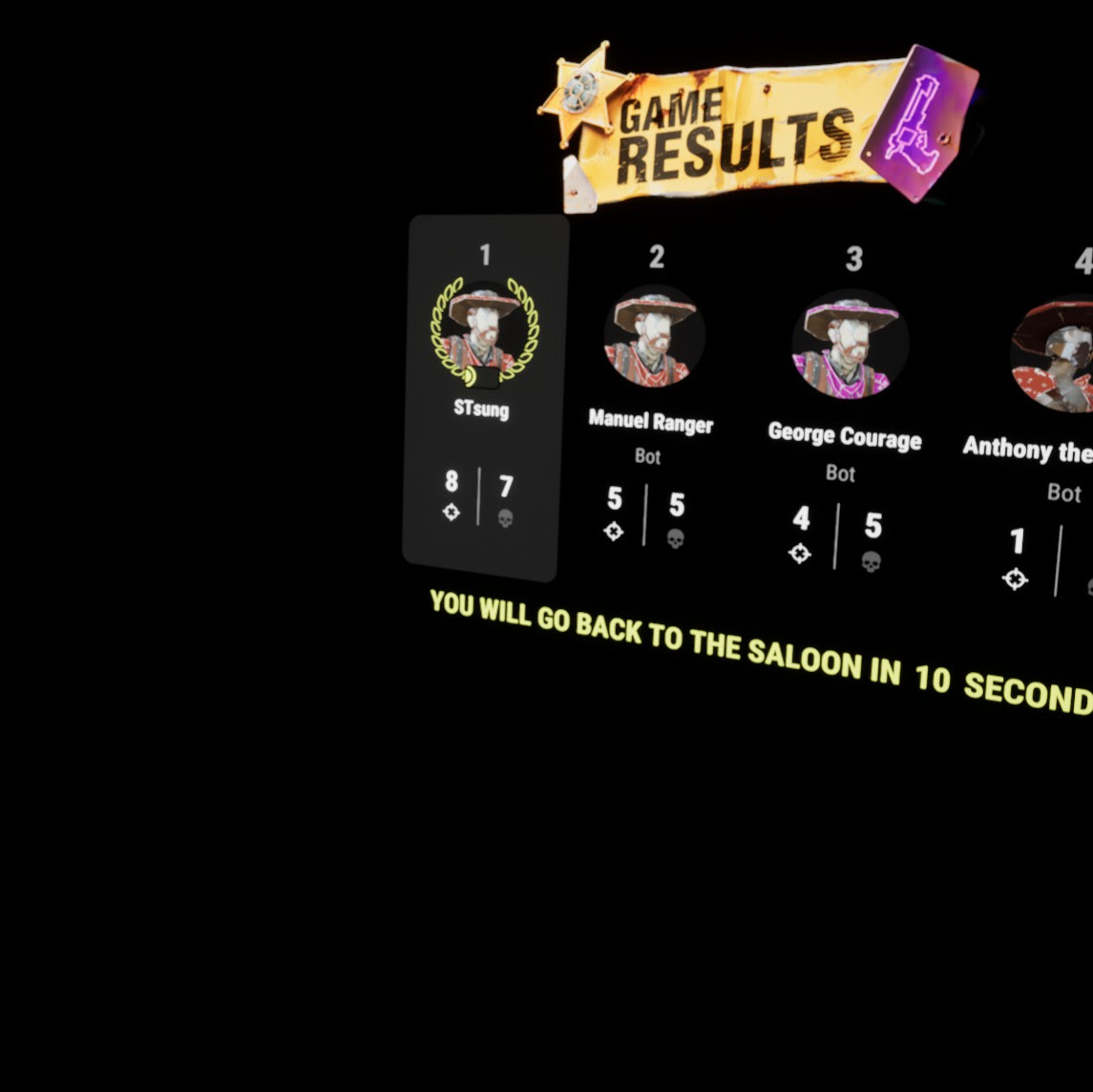 Verdict:
RevolVR 3 is a port from an arcade game. What you will be doing is playing 3 several minute long rounds in different arenas with different people or bots and that's all there is. The game features a place for socializing but the place is mostly empty and there's not much to do. As an arcade game, this works because that short experience is worth few credits. For a home version though I find it rather lacking since the replay value is not that big. The game is nicely done but the setup it requires is quite specific and demanding. If you want to be able to move freely around the play area, you need quite a lot of space (2 meters) and you also need 360 degrees tracking (including tracking on the ground level - I usually spent most of the time either crouched or on my knee, leaning to shoot or ducking even more to avoid being shoot.). The game can be played seated/standing but I find that this takes out the fun element out of the game so unless you are disabled and want to still play the game I'd keep it at room scale setting.

Moving around the lobby is only done by teleporting which breaks the great immersion feeling you get the first time you appear there. Gunplay itself - since it's a shooter - feels rather lacking, or rather there's none. I'd expect a more refined gunplay experience. The shooting itself should feel rewarding and it isn't.

I can imagine this game being good for parties but since you need friends to enjoy this game to play multiplayer it may not work that well either when your friends are over and you have just one headset available (not everyone owns several headsets/computers).