Duels of the Planeswalkers 2013 + Ravnica expansion

Quite some time passed since I won the DotP expansion. I was incapable of downloading it in order to play it. But I was looking forward to it, because when Innistrad was out and new cards were added to DotP 2012 the game became really awesome. The games started to be good and fun and sometimes it even felt like playing constructed (still too far away).

Core sets are usually pretty dull and there's not much of interaction. What I liked in DotP is the little info about synergy, speed etc of your deck. That at least let me avoid decks I don't like at all. I finished the game with monowhite lifegain but that's not my kind of deck. I beat Bolas with a mill deck otherwise I wouldn't stand a chance, or at least playing aggro seemed pretty useless against Bolas's Cruel Control. Mill on the other even without any unlocked cards was a perfect choice!

Now with Return To Ravnica we get new decks for the game and there are new - multicolored - decks. There are cards from five guilds in Return To Ravnica - Azorius (UW), Selesnya (GW), Izzet (UR), Rakdos (BR) and Golgari (BG). One guild represents two colors...Each new deck in this expansion represents one of the guilds.

Azorius deck - Aura Servants - is build around Enchantments. The most interesting card in this deck is Sigil of the Empty Throne that let's you put a 4/4 angel token in play after you play an enchantment.

Golgari deck (Sepulchral Strength) - is build around sacrificing creatures and using them to your advantage (usually meaning ruining your opponent's plans via Grave Pact or Blood Artist). The deck's most annoying creatures are Mortivore which can get really big and can regenerate and Spiritmonger that can also be pretty big and it is also pretty difficult to get rid of it. There's some ramp in the deck so you cast big creatures earlier and a lot of good removal. The deck has Pernicious Deed main deck and Maelstrom Pulse that can just hit anything (ok, not a land...).

Players that choose Izzet have the chance to play with Niv-Mizzet, the Firemind. This card is so good - it deals damage to the opponent and it draws cards - everything a control deck needs. This deck has some really wierd creatures and quite a lot of burn effects. To be honest I don't like this deck much. I would expect more counterspells and more cards like Electrolyze or Prophetic Bolt (that do something and draw cards).

Rakdos (Grinning Malice) on the other hand has some nice cards. There are discard effects and cards that destroy creatures. This deck's aim is to kill what stands in its way, to discard threats and to deal additional damage via other cards like Lyzolda

Selesnya (Collective Might) just tries to overrun you with a lot of tokens and creatures and it can gain some life as well. There are cards that create tokens and cards that can make them bigger. It can either kill in one attack via Overrun or simply by shear number of the creatures.

As with any other deck you can unlock other cards and tune your deck. Promotional unlocks are much better and there are really strong cards and good old time's staples and even nowadays ones from Magic: The Gathering. This expansion brings life to the relatively dull game (compared to DotP 2012 which was way better in my opinion.) The expansion comes with 10 add-ons for single player campaign (5 for each) and new challenges. There are other small things you might enjoy like new personnas and new set of achievements but well, that's not something I'd pay for.

Overall this expansion makes the game better but still it lacks compared to the previous one + its expansion. I'd still say that it is worth the money though. I had lots of fun with this game while playing multiplayer mainly.

Email ThisBlogThis!Share to TwitterShare to FacebookShare to Pinterest
Labels: Gaming, Magic: The Gathering

After some serious meddling with scanner and this my mother's computer (rather its operating system) I managed to scan majority of my Brainstorm alter. It could use some work and I wonder what to do with the text box. I thought about adding something there, but nothing came to my mind and it was like 4 am so I decided to go to sleep. Anyway after this alter I think I'm going to try some other ones... 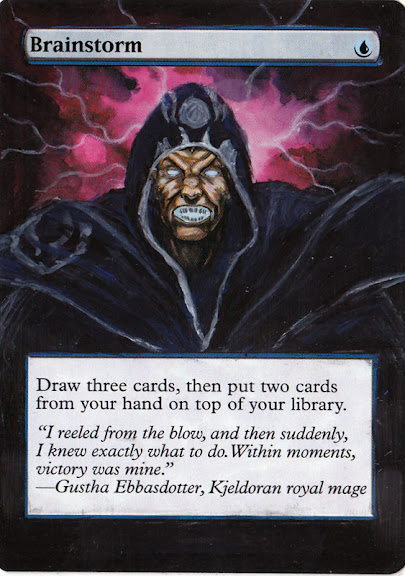 I haven't done any alter in a long while so I needed to start with something easy so my hand would get used to holding a brush. As I slowly work on my EDH deck cards I chose one of those cards - Harmonize.

(I'm not entirely content with this alter...or rather I'm not content with how it felt when I was trying to do this alter. It seemed that my skill flew away or something.)

I've been playing Legacy for the past few weeks and haven't played anything else much. This Saturday though is Return to Ravnica Game Day and that is one reason to build a type 2 deck.

I started with Jund colors. I took all dual lands I could, added Kessig Wolf Run twice and some basic lands. The cards that seemed obvious were Olivia Voldaren and Thragtusk so I put those in. I added Rakdos's Return because I really like the card, Rakdos Keyrune because I just find it good (and especially control), Farseek because that card seems pretty important if I want to play such cards and then I was a bit stuck. What other creatures to put there? There is Huntmaster of the Fells for sure but what else? Removal? Dreadbore (Annoying walkers+creatures), Mizzium Mortars (Entreat the Angels), Pillar of Flame(Zombies) .... and Bonfire (not entirely sure about this one)? I just put all those cards together and tried playing with it. It seemed strong and relatively working.

But still what bugged me was that Thragtusk and Restoration Angel is WAY better than any combination of creatures in Jund and I really missed something like Think Twice. So I switched to Bant. There is one more possibility and that is Grixis as that keeps the cards from Jund I like and eliminates green which I don't like (decklist can be found here -> Grixis Control).

What I did not like in Jund was the fact that it was quite slow and was unable to draw some cards. (I could have added Disciple of Bolas or Underworld Connections) So I tried to avoid these 'issues' in Bant. That's where Azorius Charm and Think Twice come in. There's also Jace, Architect of Thought and Tamiyo even though her role is many times different and I'm not really fond of the new Jace.

My Jund deck also had problem with late game. It did not have something AWESOME just something good. Bant has access to Angel of Serenity and to Entreat the Angels for example. Angel of Serenity is a really strong card. Not only it can work as removal so you can attack for lethal but you can also get your creatures from the graveyard and get them back when Angel of Serenity dies.

The deck starts slow, either draws cards during the first few rounds or tries to ramp a bit. Sometimes Centaur Healer shows up which can either be an attacking body or just something helping you to survive. But getting to 5-6 mana is quite fast and then you can really play some powerful spells which can usually kill aggressive decks. There's a lot of removal against aggro decks and a lot of life gain. None of these though help against true control. There the battle is a bit different - it has to be you to be the aggressive player even though that you still have to control the board. That requires some heavy sideboarding even though it seems my SB is not enough.

No matter what here's my decklist from yesterday's Return To Ravnica Game Day. Building this deck was fun and I'm glad that I started with that. Now I want to build more decks and see what works and what not. In the end it was useful for one more thing - I won the RTR Game Day, I have another play mat for my collection. I really like this one.