Our group came up with something new to balance the game....Explanation quoted from one of the originators:

Explanation for a creating a new format is simple. I have been playing magic for merely 8 years so far and every year since Lorwyn block the core of the game is from my point of view losing healthy balance and it is much more connected with producing power over quality, which may be very clearly seen in Alara block or Zendikar block including RoE which is just bunch of powerful,game changing, yet strongly unbalanced cards. Problem with players and entire franchise nowadays is, that most of the players are playing just for winning over someone which is totally obliviating the basic idea of a good game... having fun, no matter what. This problem is unevitably rooted in tournament play, where best players are not playing decks that are showing endless possibilities of MtG game, just playing the best cards... Commander should have been different but it is simply not. Therefor we agreed with Tony to create something that should be easy to build, cheap to buy, open for new ideas, much more personal, fulfilled with ideas, fun to play and even to win format. Obviously, now, the banlist is short, but after few games we will be able to expand it. I hope we will find this experiment strongly satisfying experience.

For me since Lorwyn Magic started to be a completely new game and since Zendikar it started to show in all formats (even t1). I wouldn't say that the problem is in 'winning' in general (I mean winning and having fun is subjective and it will always be a problem. it's not a problem in this group though except perhaps one person) but the problem with good and powerful cards is obvious (that's what I don't like about type 2 nowadays.) So anyway the new rules for deck construction are:

I personally don't like these rules rather I do not like rule no.5. I would like to keep EDH vintage legal because there are many cards I'd like to play (cards from Urza block are simply too awesome). My favorite cards are older than eight edition usually. I also don't think that these rules will bring balance and creativity but who knows (it certainly will lead to deckbuilding which is good)? It might in the end be a 'strongly satisfying experience' but so far I highly doubt that.

I was thinking if I want to join everyone doing this. At first I was like 'no way'. I don't like changes and I like the endless possibilities that all the sets provide. EDH is already limiting quite well for me^_^ (the reason why I think German Highlander makes more sense and follows 'normal' gameplay). Limiting it even more does not feel right. But on the other hand I already played all common decks and I had quite a lot of fun with those. So why not try it?

I wouldn't call myself creative even though sometimes I come up with something creative^_^. I took my previous Animar deck and took it apart and started looking ((physically -running around my room and checking contents of boxes I haven't opened in a long while) for commons and uncommons I could play. Animar should be a strong choice. There are hardly any global removal spells and most spot removal is black and no one bothers to play anything red usually. When I used to play all common decks I soon realized that having more creatures is really powerful so we will see how it goes in this 'new format' and how annoying the deck will be.

When going through my cards I found cards I did not expect to have (and commons and uncommons that are pretty expensive nowadays, hehe)^_^. I was looking for several effects - mana ramp/fixation, card advantage and bounce effects. I have to say that to produce 57 creatures was a really tedious task that took ages and I still miss some kind of Flametongue Kavu (I put there Perilous Myr). When I couldn't find enough draw effects on creatures I started looking for any looting effects as I'll most probably end up with lands in my hand and no creatures to play. There are still cards I'd like to replace (Clout of the Dominus for example) but I did not find anything better yet. When I play with this deck tomorrow I'd like to figure out if Animar's protections will be sufficient or the deck will need more protection for the general (which brought an unpleasant thought to my mind. I will need to be killing my opponents one by one by general damage...that does not sound like fun...) Also I need to find out how consistently I can get to other finishers. So here's my deck following the rules above. Not tested in multiplayer yet...

BTW the deck is worth 25 bucks not counting the general...which costs like 10 USD, eh...

EDIT: I cut like 6 lands and it works WAY BETTER.

I received a Japanese Wurmcoil Engine promo that I wanted to save. After staring at it for a while I'm not sure what to paint there instead of the textbox (spiky stuff...hm). So I decided to rewrite the text and leave it that way till the time I figure out how to make this card textless...It looks better now even though that my handwriting is not the nicest thing to look at...

If you are reading my blog because of alters I post here I'd like to link you to http://stsungalters.blogspot.com or my website at http://stsungalters.com. If I'll continue producing more alters than (written) posts I'll stop posting the alters here. They will be posted on my blog dedicated to alters.

Since last month I decided to start altering more often and try to earn some money this way so I could at least pretend that I 'live' in this society. So far it hardly works but I have commissions and I like doing this even though I can hardly focus my eyes after doing one or two alters. (that means also playing less Magic, oh man alters are time consuming and I don't charge much...)

I find it stupid that there is simply no place for some people and no way for them to reasonable earn at least enough money to pay for the rent and food. I tried to be one with the society and follow everything but I simply can't and all the work experiences I had (except working for Tomas Klimes and Jan Horsky) show this. I do not share the values of nowadays society and I don't have what it takes to live here. I treasure truthfulness, honesty, respect and honor and that is something I hardly find among those people I see everyday. In this society of lies, ignorance, selfishness, pretence and prejudice I'm not really sure if I can go on.

Each month for a certain period I'm in a state of turmoil, anxiety and depression. It is difficult for me to do even what I like to do and trying to do something for money is even worse. Everything just reminds me how far I let this all go. My will is strong and deep inside me there is still something that makes me go on but for how long? Can I get back to 'living' a life?

This is an alter that I just gave up finishing. After spending ages figuring out how to alter Wasteland I did not want to go through that again with Force of Will. I'll probably try once again in the future and give it more time but today (yesterday) I don't feel up to it. 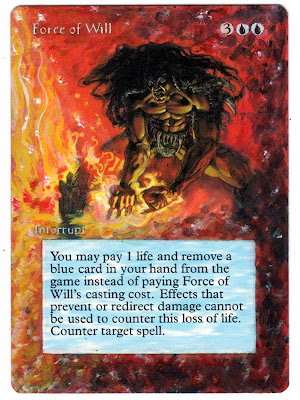 This blog is flooded with my alters. That was not supposed to happen. So here are four alters in one post. They are all for the same person and the cards left Czech Republic for Alaska few days ago.

EDIT: I got payed in cards. When I received the cards I found another card there. It was a very nice suprise from the person - Stoneforge Mystic. It really made my day.

I always wanted to alter Wasteland but I knew that mixing those 'browns' would be problematic for me...and it turned out to be a serious problem. So this card will get a revision...sooner or later. 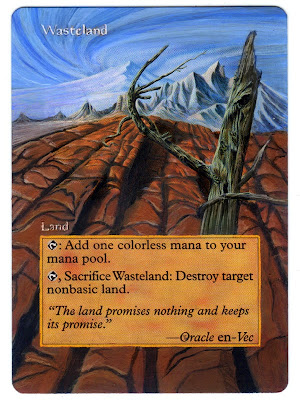 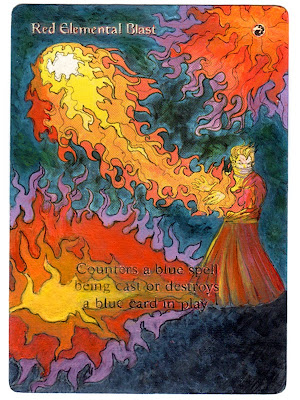 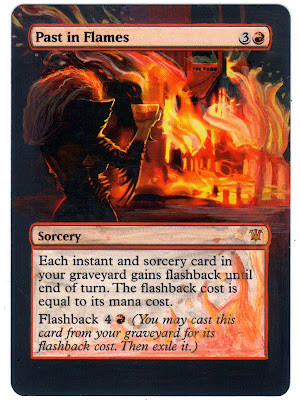 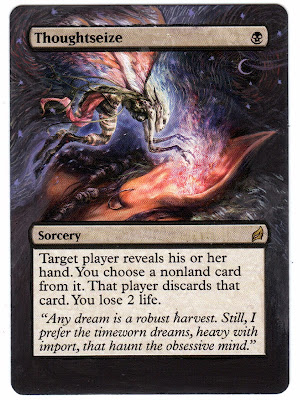 I was asked to save a heavily played Jitte so here it is... 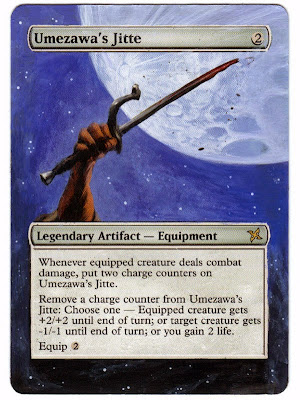