I haven't written a magic related post in a while...I'm not really sure if I'll post report from Magic Weekend Paris so here's a different one.

I build a funny Esper Artifact Aggro for extended (posted some time ago). Now we decided to try block constructed. With few changes and new cards a new deck was build. I took the idea partly from all common boros deck with Hawks and artifacts (equips)...The other part came from the esper aggro deck.

Such aggro decks die to Day of Judgment or anything so I decided to play Glint Hawk Idols and Chimeric mass to see what it can do. I have problems with dealing with artifacts in general (unless I counter that) so that's why I introduced them. (and it works to some extent)

4x Contested Warzone
16x Plains
This deck needs metalcraft soon and attack as soon as possible dealing as much damage as possible. Memnite is good with Hawks and Master's call creates artifacts that can easily be 3/3, after a global removal spell via this card you can deal lethal damage (as this deck can kill before the 4th turn). Anyway not sure how consistent this is as I haven't played much with it yet. But well signal pest is good!

Imagine this little creature with Sword of body and mind or sword of feast and famine^^. A deck running the swords would need stoneforge mystics, some little annoying artifacts and Tezzeret 2.0. Such deck might be much more versatile than this little creatures aggro deck.
Posted by STsung No comments:

Me and Lukas we arrived to Paris and we wanted to take part in both storyline and Kotei testing tournament. In the end we ended up playing the tournament on Sunday.

There were 20 participants. Six rounds were played.

Round 1 - Scorpion Ninja
In the first round, on my first turn I had only one holding after two border keeps. So I decided to play Hachimoto and hoped that he could take two provinces down with Armor of the Ryu. I knew that playing against Ninja this would most probably fail as they can move unopposed and can steal attachments as well. My opponent got few personalities, among them Keirei and a personality with Flawless Assassin. That was enough for him to destroy all of my provinces.

Round 2 - Spider Fields of the Dead
After the quick first match I went to scout the other decks. I saw 4 spider, 4 scorpion, 2 mantis, 2, phoenix, 1 unicorn, 1 crane and one lion. I saw few dishonors and something that I could describe as 'gobobreeder control'. That was the only deck that I did not want to play against. My only hope against such a deck were two events (Crossing the forbidden sea and Imperial Census).
So well...I was matched with this deck and on my first turn both events showed up. I was pretty done for. After two Ambushes and Flanked by Nightmares I could get up and go scout some more decks.

Round 3 - Scorpion Dishonor
I played against Scorpion dishonor. I don't have any meta against it so I needed to be as fast as possible. I got Kuronada in play that was later challenged to a duel by Jimen. I won hopefully and that turn the game and I won few rounds later.

Round 4 - Scorpion Dishonor
Again dishonor. This time it was really fast. Hisoka and Jutsushi early. That cost me a lot of honor. Hirose joined the gang and a Successful Bounty showed up. Few Taxing the Sum was played on me and I couldn't do much with that. Seppuku wasn't the way and I had no way gaining honor. New Order could save me 2 honor loss from Hisoka but I didn't try. Only engaging in the last battle would cost me the last honor. It was close though.

Round 5 - Spider Monk Kensai
A long game we did not manage to solve. I was too slow in attacking and did not have a deathly aura. The first personality my opponent played was Katahide - a personality that can easily kill even a crab (even with bambus in my hand). Anyway I was using Plains of Resolution and that was saving me life (personalities).

Round 6 - Spider Oni
Another Spider player...Even with a Lion deck I get to play with Bamboo Harvesters more often. Anyway I got a good start and Plains of Resolution. That card helped me the same way as in the previous round. My opponent played an Oni, attached Awakened blade and attacked with it and another personality. I went to oppose them with Benjiro and hoped that my reactions would save me and give me time for a force duel. My opponent used ranged attack from stronghold so I played Setting Sun Strike, then I dueled the oni. After that I killed the other attacker and destroyed a province in retribution. After that I could easily destroy the other provinces.

3:3
Posted by STsung No comments:

Email ThisBlogThis!Share to TwitterShare to FacebookShare to Pinterest
Labels: Legend of the Five Rings 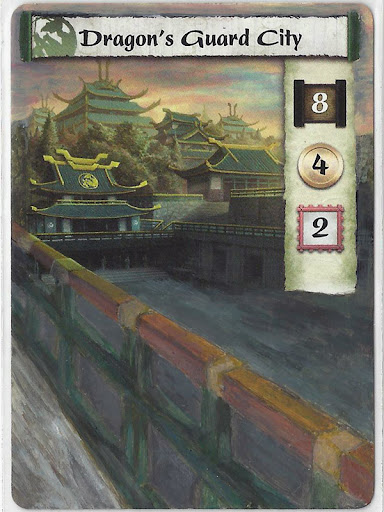