A new set was released and it also reached Magic Arena. Now we have the possibility to play with Dominaria. In the following patch we'll get limited and economy changes!

Unfortunately due to not having much free time I didn't finish this. I wanted to write report from the GP but it is probably not happening. If it will I will post it in a different post.

Last year a group of three people me, Ctk, and Heat decided to form a team and participate in GP Amsterdam. Many things happened during the upcoming months and none of us also liked Rivals of Ixalan. Nevertheless we were still about to meet in the Netherlands and have some fun doing 'whatever' and playing Magic.

On the last minute I tried to book a flight to Amsterdam which showed to be rather impossible so I tried to book one to Eindhoven instead. Letuska.cz, which was the site I used to book the flight, didn't let my payment through several times so I asked Ctk to do it for me. He succeeded so all I needed was some accommodation. He actually found something prior that and since I couldn't find anything cheaper or closer, I paid for that.

I was good to go after I'd finish all the work I had at work. The day of my departure came fast, I packed my back pack because my other cabin luggage I usually use was too big for this flight. I brought some clothes, Legacy decks, Leovold EDH deck, sleeves for limited. At the airport I was checked from head to toe and my backpack as well (lost my lock in the process). I was allowed to leave the country and I was hyped meeting my friends again.

Ctk was so nice and came by train to Eindhoven to pick me up. When I arrived at the airport I read his message that he would be late. It was 10:20 and his arrival time was 11:36. I double checked the time written in the SMS I got and wondered what I'd do in the meantime. I looked around and in the end decided to go to Starbucks and order a Flat White hoping it would taste good. Social media is a good time killer so I checked FB and Twitter to see everyone tweeting about GP Amsterdam/GP Seattle and Dominaria. I also checked my email in which ChannelFireball was still trying to persuade me to come to Seattle which I found quite funny. Time went past fast and Ctk came and greeted me. We took the bus to Eindhoven and we went to eat lunch at one awesome place - The Bengel. I ordered a sandwich with pork meat and BBQ sauce. When I got it seemed that I ordered a whole pig and little bit of bread with it. It was delicious but it was way too much meat for me. After that we took the train to Den Haag where my friends live and where I was also accommodated. Luckily I was accommodated few blocks from Heat's place which was pretty cool! The place was actually strategically well placed if one wanted to go to the city center or hop on a bus/tram somewhere else. For the price and time of booking I have to say that the accommodation was good. I just had difficulties writing or calling to my host. He was a nice fellow though, not really talking English. It was frigging cold there (everywhere except GP Amsterdam venue)! 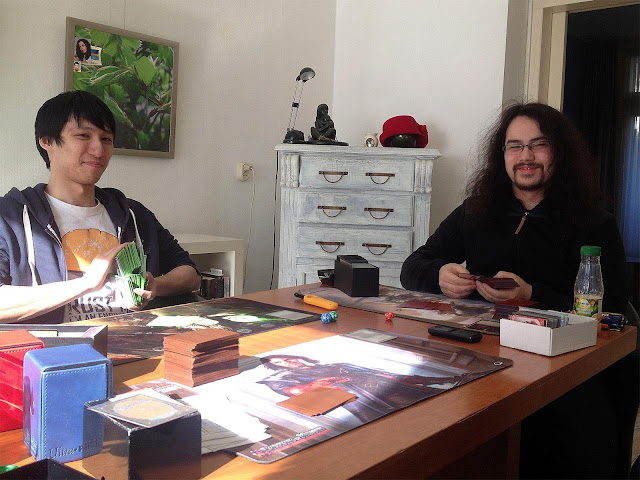 After getting my keys and stuff we went to Heat's place who came back from work early and we spend the rest of the day playing Magic and even more Magic. We played Legacy and EDH and wondered about which card is more broken than the other. We planned on playing some Legacy side events at the GP so I let Heat and Ctk to familiarize with the decks. It seemed that both decks were giving them a real headache. Death and Taxes needed to fear True-Name Nemesis but it could be assembling its own voltron and the Delver player needed to avoid the equipment hitting the game early on. The games went both ways but were usually decided by either Batterskull or True-Name Nemesis. When watching my friends I realized that Legacy is a pretty harsh place for a newcomer. It is still totally worth it and I think that GP side events were perfect for some Legacy event experience. 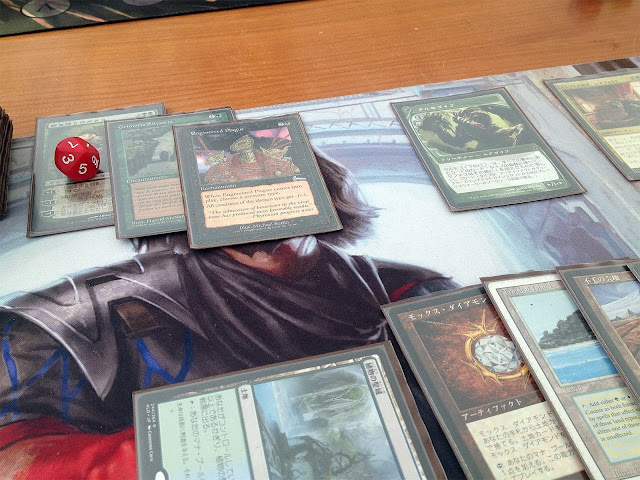 When we had enough of trying to concentrate on Legacy we started playing some more EDH. I tried hating Edgar with Engineered Plague but the card never managed to stay in play for long and I learned that even 4/4 Hasty Edgar alone was still good enough to win the game on its own even without the usual an army of 1/1 Vampires around. When we got a bit tired of Meren, Leovold and Edgar we switched to Kozilek, Teysa and Rikku. I have to say that Teysa can do pretty awesome things. The deck needed just a little bit more of a token generating cards though. When it got some tokens into play it was doing really crazy stuff.

Before leaving to Netherlands I remembered one post by Kevin Oei in Pump it Up Europe. He posted that Funland got a PIU Prime Machine. I didn't know when the post was written and if the machine was still there. When I asked Ctk about it, he told me that he has a friend working there and that the machine is still there (it happened to be the same Kevin Oei whose post I read). Since I was accommodated in Den Haag which is near Scheveningen I wanted to go there and have some fun. What I didn't expect was that I'd spend the whole time there.

Ctk asked Kevin if he wouldn't want to come meet me (and if he couldn't bring more players as well) and he said yes. We decided to meet at 1pm there which was more like 3pm in the end.

On that day I got up at 5:30 and couldn't persuade my body to sleep more. I also didn't want to annoy Heat by coming to his place early morning so I tried to spend as much time in my room and in Den Haag. Since I had access to the internet I somehow spend few hours procrastinating and then I ventured outside to take a stroll. Everything looked the same! No matter where I went all I saw where the pretty much same houses, everything in the same shades or brownish red. Since it was raining and I was becoming too wet I decided to head back and if possible not get lost on my way to Heat's place. I arrived there without problems (took the wrong turn each time I had to decide where to go) and he greeted me outside already.

I got a "hardcore" breakfast for which I was very grateful (potatos with sauerkraut and some fat meat, no idea what) because my croissant and smoothie I ate/drank earlier that morning was already turned into energy I needed running around Den Haag. We talked about stuff, played some games of Magic and later on left for Scheveningen. 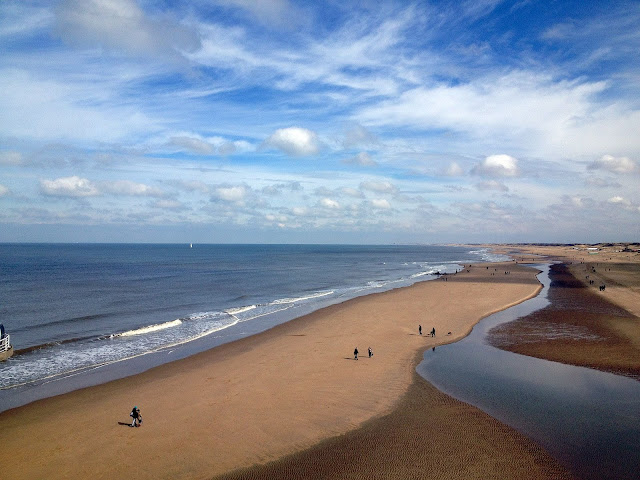 I thought that the air would be fine at the sea for me and I wouldn't have difficulties breathing unfortunately that wasn't true (I have asthma and I'm allergic to pollen, spring decided to come so my body is trying to adapt to that). We were walking around and enjoying the view and (very depressive) art while I was trying to catch my breath.

When we got back to Funland Chun was waiting for us but said that the others would be late. So it was time for me to get some Euro coins (40EUR) and hop on PIU Prime. I already knew that I need to enter full mode in order to be able to play what I wanted so that was good. What I didn't know about was my reading speed and I also didn't know that the machine actually allows me to use speed mods like 2.5x or 3.5x. So well I died on some songs because I just couldn't read them. On the other hand when I set the speed mod too high and I cleared the song it usually resulted in full perfect combo (which was a bit of a shock to see, but hey it is pump machine with a very lenient judgment windows). 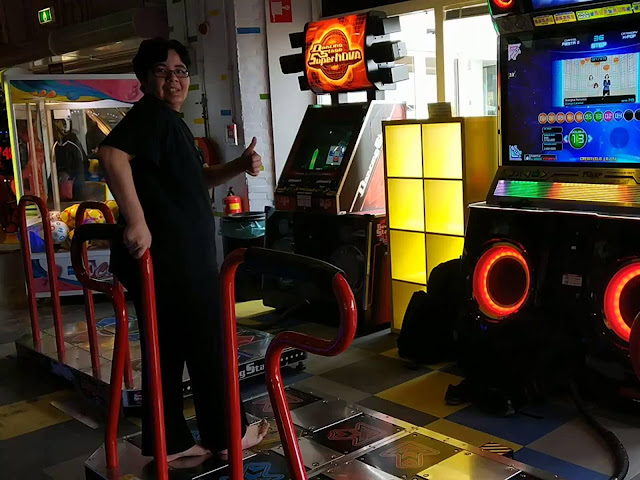 Since I love Nightmare or well doubles I played doubles mostly. I had no idea what songs there were in Prime. Even though I know many of the K-Pop and J-Music songs from elsewhere I had no idea what the charts would look like. So sometimes I picked a song and died to some gimmicky stuff in the stepchart or rather something that made the arrows move around or made them blink etc. Otherwise it was nice to play new songs and charts and both my brain and legs got challenged and my legs needed to improvise. I have to say that landing on Down-Left panel with my left foot and Up-Right with my right foot felt totally awkward (while my body was turned to the right) and I was wondering how I managed not to break my leg in the process. When I played one of the songs on doubles suddenly three notes to be pressed at once appeared and when I landed on them I realized that I didn't hit two brackets. After I finished the song I had to look down on the platform and indeed it was bracketless! Nice. The song in question is Shanghai Romance and I have a video of it actually. Here it is.

I tried playing some songs from 10-18 difficulties. I could do higher but I didn't want to kill myself. I had a GP to attend and I wasn't sure if my body would appreciate extreme playing like that. I also literally played for hours so good I stuck with lower difficulties. Around 6:30pm we decided to head to Full Moon Express to get dinner. I ordered Ramen because I needed something containing a lot of water and not that much meat. It was delicious. After this I was ready to go with my Magic buddies but they let me go with Kevin and others to Funland again. So it was time for more Pump it Up. Too many people wanted to play on Prime so I gave up and also went to put some money into PIU Pro machine. I left some not so good high scores on the machine but obviously I managed to overwrite some scores that were there for years^_^. 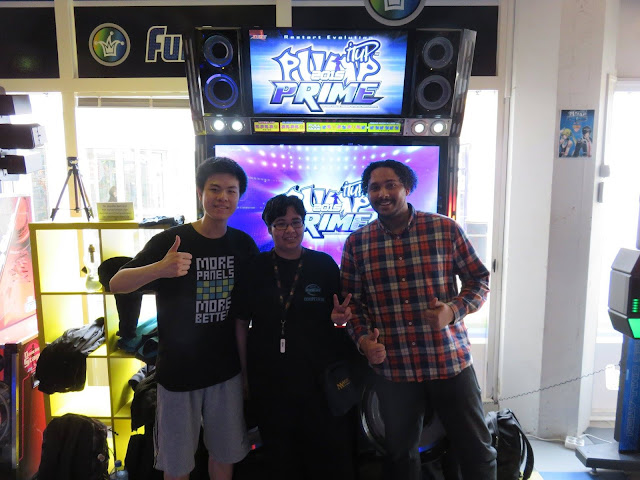 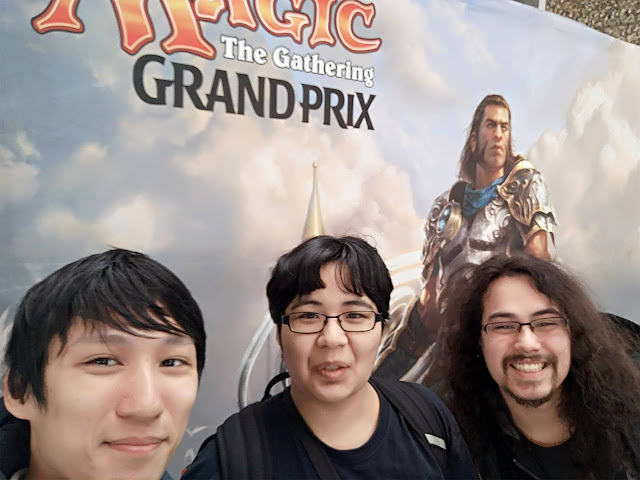 Unfortunately my writing got interrupted due to too much work at work so I will write just this: GP Amsterdam was the most 'easy going' GP I ever took part in. Even though there was over 1500 participants (522 teams) it didn't look like so. There was a lot of room everywhere, relatively "fresh" air, good organization and lots of groups of friends coming to play or families. Everyone was very nice and friendly which is something I rarely see. The atmosphere was completely different. I've never been to a team GP before so I was surprised how different it felt to be there. I hope that Wizards of the Coast will continue with Team GPs in the following years and that I will be able to participate. I'd team up with Ctk and Heat right away if they would be willing to travel to another GP again.

Doodle of the day - ITG player

STsung is proud to present PureMTGO's Dominaria preview. Come check it out (click on the image below)! 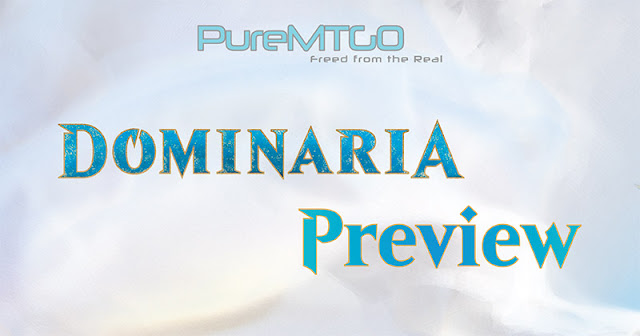