During the last month I decided to play Legacy a bit more seriously than before. I sleeved UWr Miracles, Death and Taxes, Canadian Threshhold, Esper Stoneblade, Jund (already had that) and ANT (also had that). I wanted to know what I do wrong against Miracles when playing Jund. After beating the Miracles deck like 20 to 1 I just did not figure it out^_^. Then I spent quite some time playing ANT against blue decks. After that I picked up Jund and tried to play against Death and Taxes and Canadian Treshhold. I don't know why but it seemed miserable. I wasn't losing that much but when I lost it was really bad. My deck was torn apart in a such way that I did not even think that possible. After side boarding it gets far better but still...the Jund deck could die horribly. I even tried playing with DnT but it seems that it is not a deck for me. After a miserable 2:2 at local tournament with it I decided not to try again.

This month there were quite some big Legacy tournaments in the world so I watched the coverage. I'm not entirely sure if I learned something but it was sometimes fun to watch and sometimes it was really bad. The commentating was mostly bad and some people managed to do such misplays that I did not think possible at such tables. When watching Grand Prix Washington coverage I discovered something though (not about legacy). There is something like Walking the Planes, it's fun. Watch it if you haven't already.

So prepared this way for more legacy I decided to give Jund last chance to prove itself.

I went 3:1. What was different that I won one more game than usual? Most probably it was because of not playing against Show and Tell, ANT and Elves. But anyway I added Pernicious Deed to my sideboard ditching Umezawa's Jitte and Engineered Plague, put Life from the Loam to main instead of Hymn to Tourach and this helped me against all the decks I played against later so I'll keep it that way. First I encountered MUD at the tourney. I managed to discard cards I did not want to see on the table before Chalice of the Void forbid me to do so. Later it was Liliana of the Veil that did the rest of the job. In the second game I got overrun by 2 Golems and couldn't deal with them as I simply did not have enough mana even for a Lightning Bolt. In game three I won once again (my hate against MUD was actually quite big to my surprise).

In the second round I played against Tomas Vlcek and his Miracles. For some reason I just never managed to beat him with my Jund deck at a tournament (I could beat Miracles 20 to 1 but not at a tourney^^). This time I was prepared against his Blood Moon after boarding but I still lost (even though it took a really LOONG time for him to find a Plains card and later Entreat the Angels).

After that I played against Death and Taxes. I wasn't actually looking forward to this because it really depends on my and my opponent's draw. My hand consisted of a land and Deathrite Shaman so it seemed ok. The game took quite a long time and it seemed my opponent would kill me with his flyers. But then I managed to kill majority of his board and land Liliana that didn't die. She managed to kill the remaining creatures and later empty my opponent's hand. In game 2 I sided Pernicious Deed in and hoped for a hand that would allow me to play it. I got enough land and basics helped so I swept his board and won.

In the last round I played against a fair deck running all the good creatures and managed to win. Liliana of the Veil shined.

The next week I brought Esper Stoneblade and went 3:1 because I managed to lose one game due to 'not wanting to win'. The board was overwhelmed with creatures on the otherside and I just couldn't see a way how could survive at my 3 life or so. But that was a wrong thought, I had everything I needed in order to win but my brain just couldn't switch to the win mode and I lost like 15 minutes later^^.

Round one I played against Enchantress combo. I wasn't really sure what I would do with it but Force of Will in my opener seemed good enough. My opponent wasn't really lucky I either countered what he needed or discarded it. Lingering Souls and Snapcaster Mage were beating him down in the meantime. In the following game he could hardly draw anything good. When he finally tutored what he needed I disenchanted it and that was game.

In round two I had this unfortunate game against Death and Taxes. I lost the first game I don't even know how. But the second game I could have won, I was just too afraid of losing that I did not realize that I can win.

In round three I played against Canadian Treshhold. I was quite surprised how easily I managed to win. My manabase got wrecked and I was facing Delver and Mongooses but Engineered Explosives backed up by Force of Will destroyed them later and then it was Stoneforge Mystic time. I struggled with three basics the other game as well but apart from having 1 blue mana less than I wanted I had everything I needed. I played Intuition into 3x Lingering Souls and the game ended quite soon after.

In the last round I was pretty tired and managed several serious misplays (I couldn't Brainstorm correctly). My opponent played some kind of Esper Control as well but did even worse misplays than me. He could have killed my Jace in two turns and Sword a Spirit token with Jitte. He did not do that and that resulted in me beating him.

After looking back at me trying to play Jund I have to admit that I like the control deck many times more than Jund. It felt much better playing Stoneblade and I did not get that frustrated because of bad draws. So next time it's going to be Stoneblade time once again. Last legacy tourney I played Jund because I knew my brain wouldn't be able to play Stoneblade. I played four times against a Delver deck what a luck^^. I tried winning what I could but even first turn Wasteland -> Tropical Island, Surgical Extraction -> Tropical Island did not win me a game^_^. I went 2:2 *sniff*.

Game of Thrones Intro attempt no.1

One of my dreams is getting a digital piano one day. But well that means that I'll have some spare money in the future. So from time to time I play on the piano in my parent's house. It sounds terrible but still it feels great playing the piano. I want to start over...simply things first, more complex later. But mastering even simple scores would make me happy. Long way to go. -> GoT Intro
Posted by STsung No comments:

Email ThisBlogThis!Share to TwitterShare to FacebookShare to Pinterest
Labels: music - played by me

During the night I produced yet one more Jace Brainstorm. 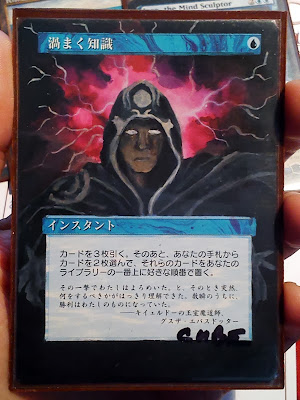 After the success at the first tournament I decided to go to the second tournament of the series. But I wanted to change my deck a bit. My BUGw Aggro conrol sometimes has hard time killing my opponent with its 1/1 mana dorks so I wanted to try something a bit more agressive. The week the second tournament took place there was another highlander tournament at a different game store. A friend of mine asked me to prepare him a deck so he could play. I took out my Cube and chose all the good cards of all colors I could possibly use for the deck.

I added some lands, but I needed to cut quite a lot of them (as 10 dual lands, 10 shock lands and 10 fetch lands is already 30). In the end I added few more cards like Dryad Arbor, Fleecemane Lion (not going to play this anymore) and Loxodon Smiter.


My friend made 4:0 at the tournament. The day before the tournament I wanted to play in I was asking people on facebook if I should go 5c or show up with my old deck. Those who answered were for the 5c deck so I went with it.

During the tournament I played against a staxx deck that beat me. Trinisphere in all the first turns was simply wrong for me. In the first game it is something that actually won me the game but otherwise I just couldn't do much with it. In one of the games my opponent could't draw a card that would kill me. So I was there stuck with nothing to play and sometimes dealing 1 damage to Ajani so I could keep my lands for few more turns. But then Armageddon decided it all. The other game I lost was pretty short as I couldn't deal with early Tezzeret. The other deck that beat me was mono white. The pilot of the deck went 6:0 and beat me in the final round. I could have won. The only thing I needed was a flipped Delver of Secrets^_^. But no instant or sorceries followed in the next five turns unfortunately for me...

Anyway during the tournament I did not really have so many problems with my mana base - that's something I feared the most. Those problems I had were caused by the fact that I did not recall what shocklands I put in the deck and that resulted sometimes in having wrong lands in play. But with the knowledge of the lands in the deck everything would be fine. Draws with something like Mountain + Badlands as my only lands were really discouraging but usually one mulligan solved the problem (I got once Bayou + Forest instead of even worse combination but it worked fine). Once it took me three turns to play Falkenrath Aristocrat as I couldn't get Black or Red but I won the game no matter what...but it meant finding Sakura-Tribe Elder and surviving one more turn (which could mean I could lose pretty easily). Anyway the deck is agressive, it can counter and occasional burn helps a lot. I'll probably try playing with this in the following tournament as well. (this deck could hardly beat my EDH though o_O That WAS discouraging...)