Random Photo of the Day - Taurus and Jupiter

I took a picture of the night sky to locate what I saw yesterday evening and this seems quite a nice thing to share. (click to enlarge) 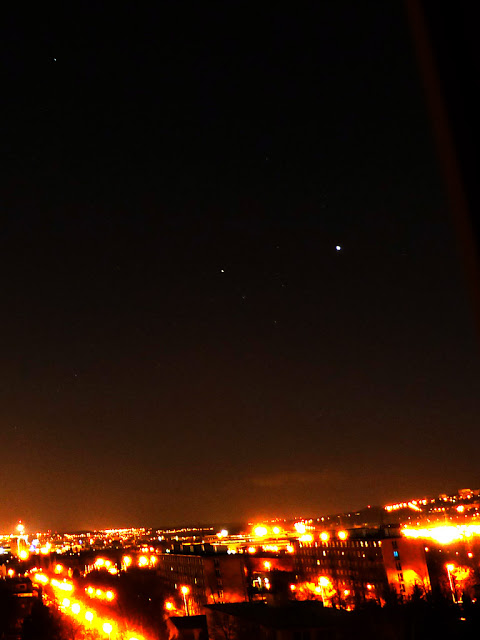 Email ThisBlogThis!Share to TwitterShare to FacebookShare to Pinterest
Labels: Photo of the Day

I wanted to take a picture of the clouds outside and then there was red flash and something that started to burn.... and flew away in 30 seconds. Last time I've seen like this was when Zendikar was out that thing was much bigger than this one. But this time I could take a picture..

I still need to do something with the background color. I can't manage to match it....hmph....I tried several times but none of the colors I tried worked...

Tomas Gottwald offered the Gatecrash prerelease participants to draft his magic cube. There were 12 players that were divided into two pods.

There was a lot of chaos before the draft but after a really long time we finally managed to settle on something and draft.

My first pick was Thragtusk so I hoped for something like BG or BGW. In the first booster I also picked Tooth and Nail. I was picking BIG creatures including (white) Akroma, Avenger of Zendikar and I even got Progenitus. I wasn't really sure what I would be doing with all those creatures. The rest of the cards were mostly removal - Terminate, Go For the Throat, Damnation. At that time I was at GWb. I wasn't really picking lands but City of Traitors was passed to me so I immediately went for it.

The second booster was all Boros. My pick was something relatively mediocre like... Staggershock. Later on I was picking more starting with Burning Tree Shaman and continuing with more removal Breath of Darigaaz, Devil's Play, Chaos Warp (against annoying walkers) etc. I also got Defense of the Heart so playing all those big creatures was relatively possible. A lot of 'small' aggressive creatures were in the second boosters and I had none of those...except for Jackal Pup and Stormblood Berserker.
I also got my hands on Badlands and Ancient Tomb and I was really sorry to pass Verdant Catacombs.

The third boosters brought some awesome cards - Primal Command, Fire Covenant and Deranged Hermit. I was happy with those but I was still not ready to play red. I just did not want it.

When I started building my deck I realized that the original idea is not going to work so more and more cards were replaced by red cards and I even played Violent Eruption and Akroma, Angel of Wrath. Triple red in a color I wanted to splash o_O. Something was certainly wrong.

My deck was light on creatures and I did not have much acceleration except for my two awesome lands (and Fyndhorn Elves).

In the first round I played against Zdenek who showed me pretty annoying Vraska and Sorin (Lord of Innistrad, I had the other one^^). The little vampire was attacking with Sword of Feast and Famine equipped and I couldn't do much about it. My burn spell was incapable of killing it and Go For the Throat simply did not work. I hoped for Devil's Play or Chaos Warp but none came and I lost. In game two I sided in Crucible and more burn spells. Crucible because Zdenek showed me not only Strip Mine and Wasteland wrecking my mana base but also Sinkhole and burn spells against the walkers I couldn't really deal with.

I wasn't really playing anything except lands and one (obviously as there is each card only in one copy) Phyrexian Rager. My opponent was losing life from his own mana base and Necropotence. That was good for me. Because I knew that Devil's Play would do it sooner or later. Triple red was quite a problem but anyway Devil's Play did the job. The last game was rather similar even though my opponent was a bit more catious.

Round 2 and I played against Pepa. He had a nice GW aggro deck that. It was difficult to keep up but all that removal I had I managed to survive till the point I played Thragtusk and Akroma. In the second game I had Snuff Out, Defense of the Heart and I thought that this would be good enough. Too bad that on T2 Gaddock Teeg showed up and I was unable to deal with him. In game three I tried to survive the attacks of 3/3s equipped with Bonesplitter. Fortunately it was JUST a bonesplitter. It came down to me being at 8 life trying to survive another Treetop Village + Bonesplitter Attack. I thought I would play Fire Covenant killing it but I managed to play a wrong land. Hopefully my top deck showed Primal Command and I could play Tusk later and gain 7 life. And all the time I was losing 2 life from Ancient Tomb - the only land that saved me from ANNOYING Thalia. I played Fire Covenant. Tusk a turn later and won few more turns later via Avenger of Zendikar + Devil's Play.

In Round 3 I knew that it might get difficult. There was Force of Will, Miscalculation, Spell Pierce and maybe even more counterspells that I've seen passing through my hands. A control deck should be able to deal with my deck quite easily. I hardly played more than 3 creatures per game ^_^ and was usually killing my opponents with Devil's Play. My opponent though was playing about the same number of creatures. The first one was Baneslayer Angel that I killed the first turn it showed on the table. He was all tapped out so I played my Deranged Hermit. Magister Sphinx followed but I did not really need to care about her. All I needed was to deal damage with the saprolings (+ Staggershock). I lost game two due to Gideon locking my poor Akroma but I won the game three which featured Batterskull and Magister Sphinx again. But still my only creature (be it Avenger of Zendikar or Deranged Hermit) was capable of dealing quite a lot of damage - putting my opponent once again into Devil's Play range.

I won the cube draft (winning a nice Spanish Wurmcoil Engine). It was really nice. Thanks everyone! 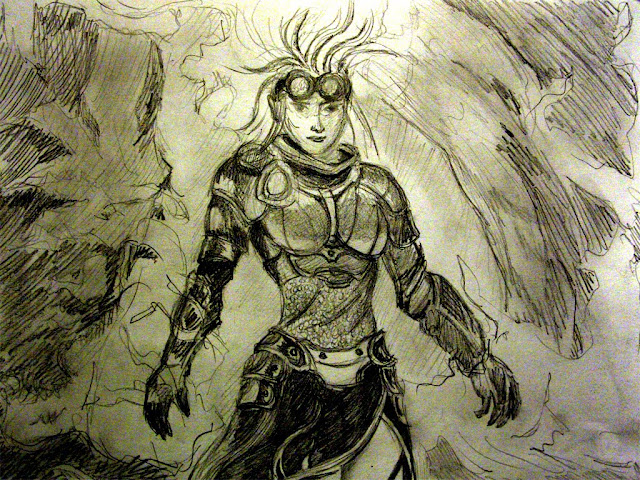 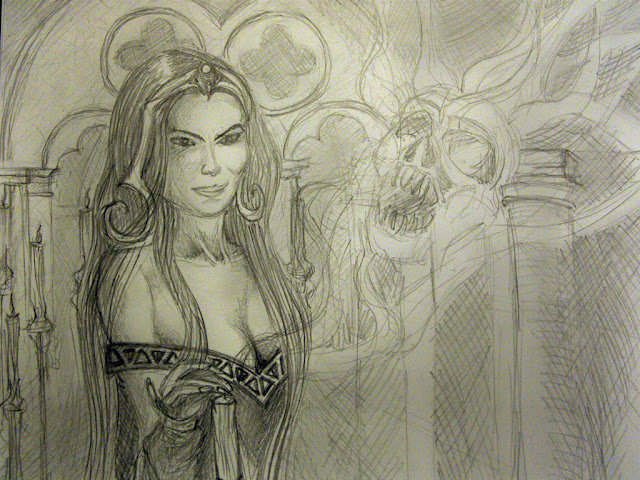 Fixing the Jitte image^_^. There are two things I don't like on the original one - the background and the greyish speckles....

So here's Umezawa's Jitte how I imagine it (with the skill I have). 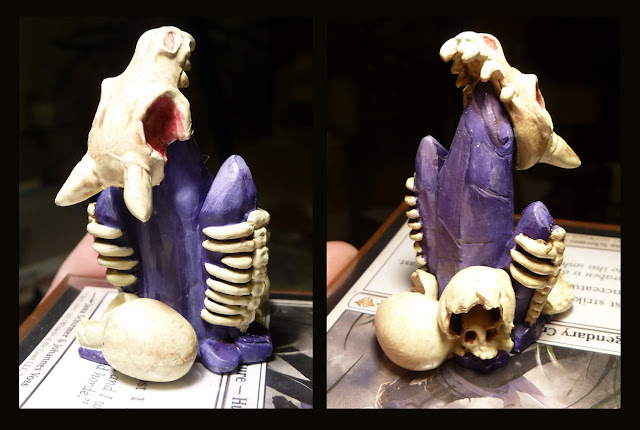 Drawing Exercise - Force of Will

This makes me envy all those who can draw and paint well. I have a lot to learn and I really need to draw. I like doing it but I'm not sure if I make any progress. Well here's an attempt at Terese Nielsen's Force of Will. I decided not to finish it as it really took all of my will and patience to even make it look more or less how it should...grrr. 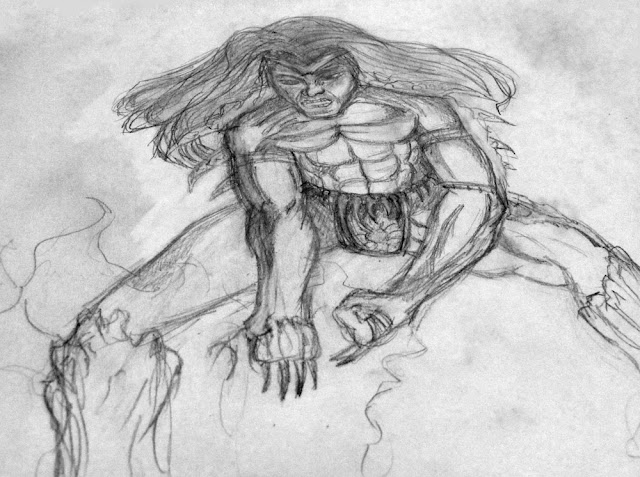 I need to use copic markers in order to get better and figure out how to work with them. So well..here's today's attempt at using them. Anyway I need to learn how to draw and... simply draw. 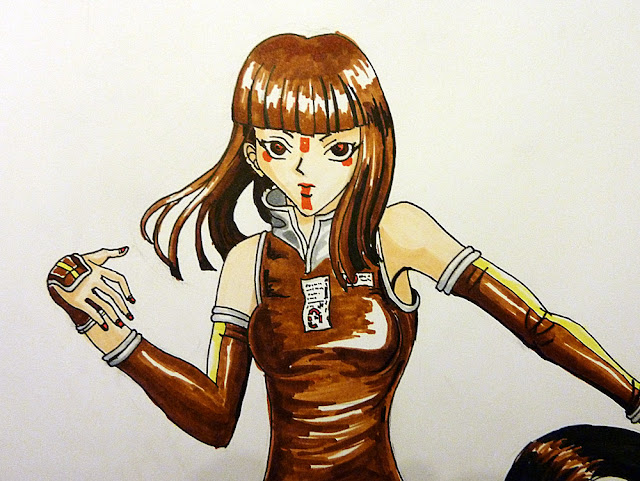 I decided to go a bit freestyle on this one. And I quite like it^_^. I will probably add more contrast to the skull later. 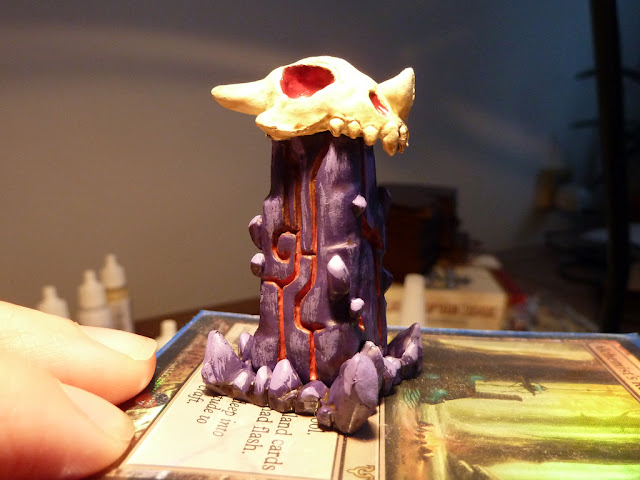 Email ThisBlogThis!Share to TwitterShare to FacebookShare to Pinterest
Labels: Highlander, Magic: The Gathering

I build a Magic Cube following the previous Cube from Magic Online so we could draft it and have some fun. But it seems that I can use it even for more. I can just build a highlander deck out of it and with more or less success it might work. So here's the first decklist.
BG
1 Acidic Slime
1 Arbor Elf
1 Avenger of Zendikar
1 Birds of Paradise
1 Bloodgift Demon
1 Elves of Deep Shadow
1 Eternal Witness
1 Fauna Shaman
1 Fyndhorn Elves
1 Garruk Wildspeaker
1 Garruk, Primal Hunter
1 Genesis
1 Indrik Stomphowler
1 Karn Liberated
1 Llanowar Elves
1 Massacre Wurm
1 Master of the Wild Hunt
1 Nefarox, Overlord of Grixis
1 Noble Hierarch
1 Obstinate Baloth
1 Phyrexian Metamorph
1 Primeval Titan
1 Sakura-Tribe Elder
1 Scavenging Ooze
1 Sheoldred, Whispering One
1 Shriekmaw
1 Solemn Simulacrum
1 Terastodon
1 Thornling
1 Thragtusk
1 Thrun, the Last Troll
1 Vraska the Unseen
1 Wall of Roots
1 Wickerbough Elder
1 Woodfall Primus
1 Wurmcoil Engine
1 Yavimaya Elder

Email ThisBlogThis!Share to TwitterShare to FacebookShare to Pinterest
Labels: Highlander, Magic: The Gathering

These little guys took me ages to do and I'm not still satisfied. Plus the photo is bad...So here are 4 kobold slingers. They will need work in the near future. I will take other photos during the day and hopefully you might be able to see a bit more.

I did not know that there is another chest. I discovered it among other Kobolds. So here it is.