I've been hearing and seeing this name on Magic forums and Facebook I did not really know much about it until recently when I played few games over it. So what is Cockatrice?

Cockatrice is an open-source multiplatform software for playing card games, such as Magic: The Gathering, over a network. It is fully client-server based to prevent any kind of cheating, though it supports single-player games without a network interface as well. Both client and server are written in Qt 4.[cockatrice.de]

I used Apprentice years ago then switched over to Magic Workstation. I abandoned that software because I encounter a lot of people that behave really bad or they think that they know the game. Anyway MWS is not bad and I thought it well done. But I have to say that I had many issues with installing new sets, exporting database and loading newly created decks into MWS Online Play.

Cockatrice is a alternative to MWS. It is really easy to install. You just download it and run it. It will install the software and then run Oracle which is the game's database. To update with new set you just have to run the Oracle and it will do the work for you. The images are downloaded either on the fly as you play the card or you can download it at once (or use your MWS images).

Deck Editor
You can create a new deck in the deck editor or load an old one - which can be either in the software's format or any text type one, it loads MWS files as well (.dec, .mwDeck). The deck editor is fast and creating your deck is pretty easy. And there is no blue and green arrow as in MWS. You can entirely use your keyboard. Type a name, highlight the card you want with the arrows and hit enter how many times you need the card. This has allowed me to create my EDH decklist in a really short time and that was a big plus for me.

When you have a card highlighted in your decklist using + or - you can change the card count. 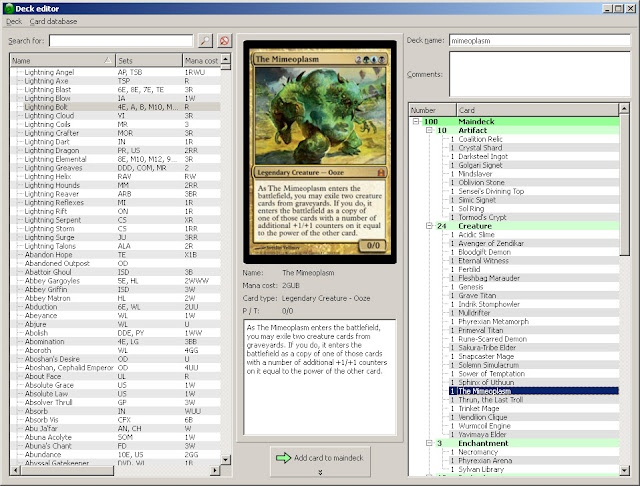 Shortcuts
If you've ever used MWS then you already majority of the shortcuts. This has allowed me to play via Cockatrice and do not look as a complete idiot.

F2 will concede a game letting you to start a new one in the current session
F3 will show your library that can be sorted in several ways (alphabetically, by type...helps a lot even though at first it was rather confusing to me)
F4 will show your graveyard.
F11/F12 changes life total.

That's what comes to my mind when trying to remember some shortcuts. If you right click a certain zone you'll get more options or you can access it via the game menu.

Targeting is done by holding the right button and moving the cursor towards the target.

Play
Once you have your deck you can connect to a server or start a local game. Everything is free and works wonderfully. You can play 1-on-1 game or a multiplayer game. You can let spectators watch you play and talk in the chat (or disallow it). This allows for judges of online tournaments to be there. This seems as a really good feature and will make tournament play possible. There are different kind of league tournaments played via Cockatrice (for example Win a Dual Highlander Series). 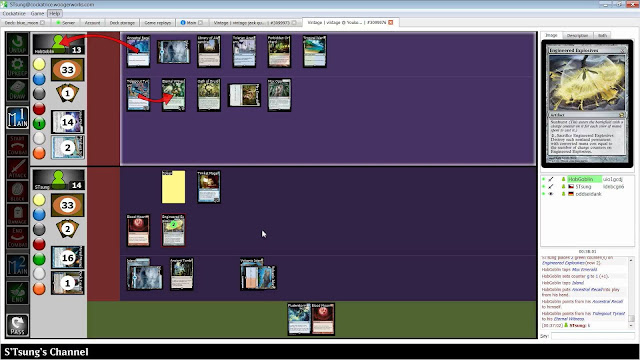 When you start a game, you have several green, blue and red part on the screen. They are your hand, battlefield and stack respectively. I didn't know about the stack until my opponent was placing cards there and that showed in the text/chat window. It sure is helpful if you actually use it (I gotta start to do that). Other elements on the screen are player name, avatar, life total, library, cards in hand, graveyard, RFG zone, turn structure, mana pool + storm count, card description and the chat window.

The software is colorful, but it is fast, efficient and well done. Check it out.
The player base is low for the time being but I think many more people will start to play on cockatrice server.

BTW you can download it from http://cockatrice.de/ (not anymore so go to -> http://www.woogerworks.com/

Email ThisBlogThis!Share to TwitterShare to FacebookShare to Pinterest
Labels: Hardware and Software, Magic: The Gathering