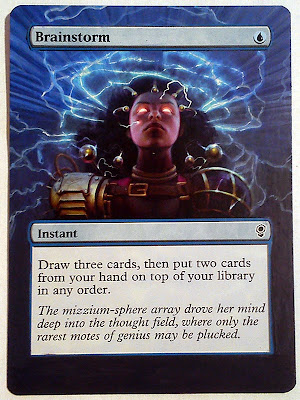 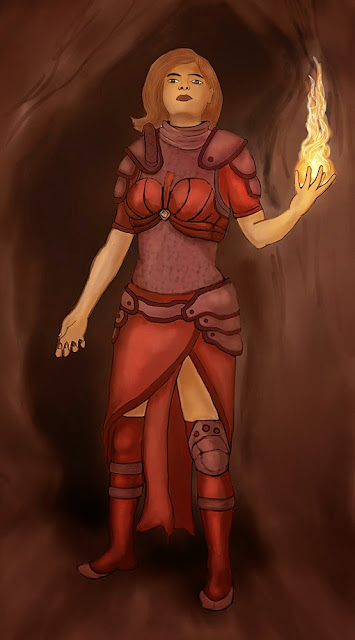 Email ThisBlogThis!Share to TwitterShare to FacebookShare to Pinterest
Labels: Magic: The Gathering, My Creations

~蛇神~
no one dances to cloudy music like this girl! NOBODY! HAH! EAT IT! JEALOUS LOSERS! Try harder NEXT TIME!
Today, 04:33 AM


Ghost requested me to play Cloudy Music and because I did not really feel like playing the song I decided to dance to it. It was just an improvisation, something I thought would just pass unnoticed. I uploaded this to youtube and shared it in the bemani IRC channel or forum...and something I did not expect happened - people actually appreciated the video. And still even now when some people see it they are like 'wow'. I never considered this to be any good or anything...

Today's comment made my day^_~. So I decided to celebrate it by playing IIDX. I wrote some of my scores down and after entering them I saw that my scores are the worst entered^_^. But at least I can improve now and I can store some of the scores somewhere. I haven't played in ages, but I plan to play a bit more often. I might get back to my previous level even^_^. So I could see once again As, AAs and some occasional AAAs ... not Bs, Cs and worse...^_^

And this is for ~蛇神~. Not my best score (as I could easily AA this...) but at least an A after all those years. Thanks for stopping by my profile at Solid State Squad. 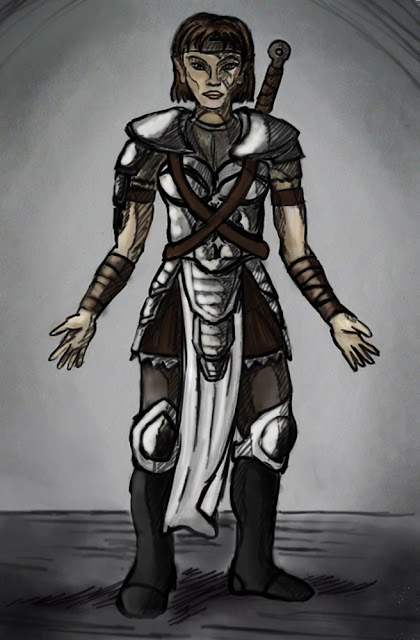 No one was capable of answering me one question about foil cards and permanent markers. So I tried if there is a way of getting the permanent marker of the foil card without damaging it...so far so good.

More photos from the experiment (it went on...) -> at my facebook profile 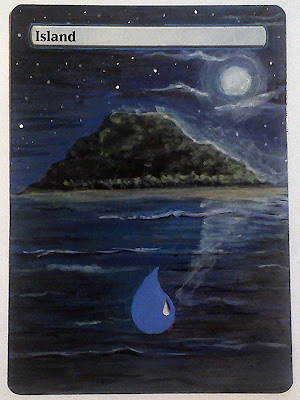 Whenever I played my Japanese Sylvan Library at some EDH tournament players had to always mock me because of the card being white bordered so I finally decided to alter the card. I'm not happy with the result but I'll get back to it and make it a bit more yellow and I'll darken some areas. Hopefully my eyes will like it when I'm done...now it's time for some work and EDH tournament^_~

EDIT: I repainted the Library. I added quite a lot of bleached bone (actually 'washed' it with it) and darkened some other areas and tried to make it more smooth.
Tournament did not take place. *sniff*. 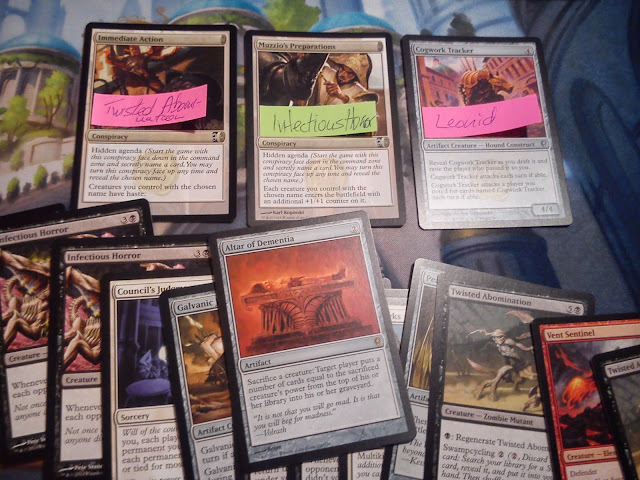 Today a Modern tournament took place in Najada. I decided to participate to see if I have some chances playing Birthing Pod deck at the upcoming PTQ. I encountered 3 jund decks and after this experience I was more or less persuaded that I won't even bother participating in the PTQ. I want to have fun not to utterly die. I had some fun games but otherwise it wasn't fun at all. So when Conspiracy drafts were announced I started thinking if I wanted to play Conspiracy draft or not. I missed the first one and let one more Jund beat me (a player who would really need some lessons on how to play Jund). Five more people came for Conspiracy later. One more player was needed so I volunteered to play (that I wouldn't pay but would bring packs next time I show up instead. I keep a box that we were supposed to draft today, but none of the players actually contacted me so I decided to let that go...).

I had no idea what I would be drafting and how the multiplayer game would go. After opening my first pack I knew perfectly what I would want to draft. Unfortunately after reaching my rare I decided to pick it - Council's Judgment - instead of a reanimation spell thus changing the type of deck I would play. In the next booster pack I would gladly pick Compulsive Research, Fact or Fiction but in the end picked Twisted Abomination. Later on I tried to pick all the Infectious Horrors and Syphon Souls I encountered. One player passed me Altar of Dementia and from that moment on I was picking creature spells only with the exception of occasional Brainstorm when there was nothing I wanted. Few Vent Sentinels passed by (why???) so I decided to pick those as well. In my third pack I opened Basandra and picked it because there wasn't anything else interesting for my deck and this was easily splashable 4/4 flyer and I also had the Sentinels already...(Flyers seemed a very good idea, but I was more excited about the Sentinels...). I also picked Woodvine Elemental somewhere. I did not plan to play it but wasn't really sure if I wanted to be beaten by it. During the draft I wasn't eager picking Conspiracy cards or any multiplayer game cards so I wasn't sure how my deck would fare in multiplayer game. I picked two conspiracies that seemed to make sense, 4/4 for 4 that would be primarily attacking Leonid and Unhallowed Pact that seemed quite fun. Apart from these cards my deck looked completely normal (if Altar of Dementia is normal^_^ that is). My deck in the end was a WBR deck with spalsh for the Elemental that I could possibly replace with some random Zombie and would need to play a Forest. The two conspiracy cards were - one that puts +1/+1 counter on a named card and one that gives the named card haste. I chose Infectious Horror to be bigger and Twisted Abomination to be hasted (but this wasn't needed at all as I soon found out).

In the first game I played Altar of Dementia as my first card. Later on I played Galvanic Jaggernaut. This creature is simply insane. I was playing creatures only to sac them so I could mill player on the right and untap my Jaggernaut. Both players tried to come up with a way how to deal with my board and managed to kill majority of my creatures. But Vent Sentinels and Wakestone Gargoyle was enough to get rid of both players later on. I pinged the player on the left and killed him in the process and milled the last 7 cards of the player on my right.

In the second round I played against more creature heavy decks. One with ramp, Terastodon, 4/4 Rhinos, Wolfbriar Elemental, Pelakka Wurm and the other one with smaller creatures and Magister of Worth. Altar of Dementia came handy once again and I was few attacks from killing the player on the left. But the last player played Magister of Worth and we all chose the mode that destroys all creatures. I enchanted one of the 4/4s with Unhallowed Pact so I got it under my control and I regenerated my Abomination. I killed both soon after that.

In the third round it was me playing smaller creatures and swinging with them. I almost killed one player but he saved his life with Nature's Claim. All I needed though was this player to eliminate the other player so I would win the whole tournament. So I decided not to attack him next turn (and kill him in the process) and let him eliminate the last player. Who got overrun by 10/10 Pelakka Wurm and some 'smaller' creatures. It was lots of fun!!

So instead of tomorrows PTQ I might actually go and play more Conspiracy. ^_~ 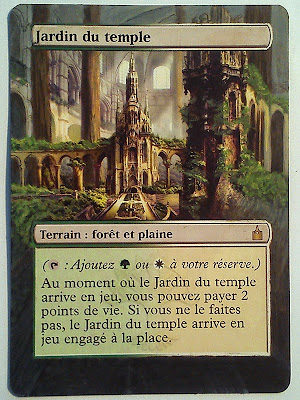 I started priming and altering this during some games of SolForge in which I played mostly against mono green decks but none of those could withstand my BG Rock decks. I'll have to get back to this alter and somehow make it look better to my eye...still I have no idea what colors the illustrator used...I can't seem to match them. It's much more YELLOW than I thought and well...there are places that seem pretty dull...hm?