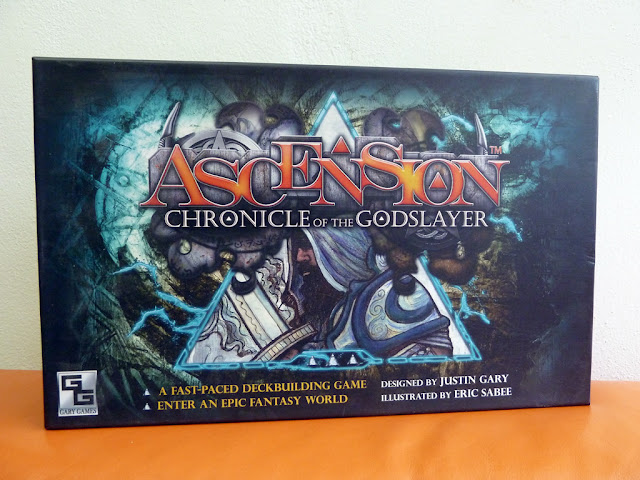 Ascension is a game produced by Gary Games (and also designed by several Magic: The Gathering Pro Players) and is another game of a rather new game type - deck building games. The first deck building game that we could play was Dominion which was published 3 years ago. Since then a wide range of deckbuilding games was created. Ascension is one of them and became quickly popular.

The game takes place in Vigil, a world that has been protected for millennia by the Great Seal, keeping the realm free from divine influences. It was put in place after an ancient war with a corrupt god, Samael the Fallen, when it was decided that none of the gods should be able to interfere. But now, the Seal is failing, and nightmarish Monsters that had been forgotten are breaking through. Your job, as a hero of Vigil, is to take your small, ragtag band of Apprentices and Militia, and gather an army powerful enough to lead you to your destiny as the Godslayer, and in doing so, slay Samael once and for all.

Ascension: Chronicle of the Godslayer has a very simple rules and can be setup really fast. It is a game for 1-4 players. Each player gets a starting deck containing ten cards. There is a central row which contains a pool of cards from which you either buy cards or defeat monsters. After a card is bought or destroyed a new card fills the vacant slot. To buy a card you need a certain amount of Runes. To defeat a monster you need Power. Your starting deck contains 8 Apprentices (Runes) and 2 Militia (Power). You start the game with five cards which means that you have three different starting hands.

In the center row there are three types of cards - Heroes, Constructs and Monsters. Heroes are played and have a one time effect. At the end of turn the cards are put into a discard pile. Constructs unlike heroes stay in play after they are played (until they are discarded by an effect). Monsters can be defeated and they give you a reward in the form of Honor Points and sometimes have also an ability.

Each player also has access to three different cards at all times - Mystic, Heavy Infantry and Cultist. The first two are unaligned Hero type cards that give you 2 Runes (Mystic) or 2 Power (Infantry). Cultist is a monster that can be defeated if you have at least two power (you gain one Honor when you defeat him).

The game ends when a certain pool (depends on the number of players) of Honor points is depleted.

When the game ends each player counts the number of honor points they have (cards in your deck have them, see a number in a star on the bottom left corner of the card, and you also gain them by defeating monsters). The player who gets the most honor points wins the game.

There are four different factions in the game.

The Enlightened that can usually draw cards and kill a monster with a strength X. (They prize knowledge above all else and want to achieve the enlightenment)

The Mechana are engineers that create machines of immense power. Mechana cards allow you to draw cards or kill monsters based on the number of mechanas you control. They also reduce the costs of other constructs and have the best cost to honor points ratio (easily 1:1).

The Void are warriors that worship Death. Void cards give you Power and card draw (allowing you to banish/remove from the game cards from your hand or discard pile).

The Lifebound...um. Well Lifebound cards have a variety of effects that don't seem to do anything together. They usually give you runes and Honor and accelerate the game, thus are a good in combination with strategies using primarily Power to beat monsters.

Ascension the game is a very fast paced game that can be brought anywhere and set up very fast. Explaining the game doesn't take long and it is a game very easy to teach. The game is though very complex and takes time to master. The game is best suited for 2 players from my point of view and has a team variant where players can buy each other a card by paying one more rune for the card (the players of one team do not sit next to each other) which is actually a better way to enjoy the game in 4 players. The game is slightly unbalanced with Power strategies being favored but otherwise allows to explore all kind of decks and strategies. It has a good balance between skill and variance which makes the game more enjoyable to players of all levels while this game can be competitively played 1-on-1.

If you are tempted to try a deckbuilding game I'd recommend this one, because it seems to be the best one out there.

Email ThisBlogThis!Share to TwitterShare to FacebookShare to Pinterest
Labels: Board Game Reviews